Scuderie del Quirinale
The Scuderie del Quirinale (Quirinal Stables, also called Papal Stables) was built over ten years, from 1722 to 1732 . The Scuderie, together with the Palazzo del Quirinale (Quirinal Palace – official residence of the President of the Italian Republic) and the Palazzo della Consulta (Constitutional Court – originally a villa built upon the ruins of the Baths of Constantine and adapted by Sixtus V as a civil and criminal court), make up a stunning urban space. At the center of the spacious piazza between these three buildings stands an obelisk – moved from nearby the Mausoleum of Augustus in the eighteenth century – atop a fountain and the famous statues of the Dioscuri (the two gigantic Roman marble “Horse Tamers”, Castor and Pollux). 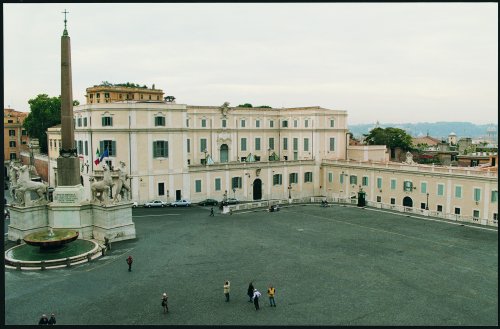 The Scuderie stands next to the Colonna gardens and on top of the archeological remains of the great Roman Temple of Serapide – some of which are still visible.
The building covers approximately 3000 square meters , over several floors. Wide-open spaces on the second and third floors house the exhibitions. A cafeteria is situated on the mezzanine level and a bookstore, a giftshop and special areas dedicated to exhibition-related initiatives are all on the ground floor.