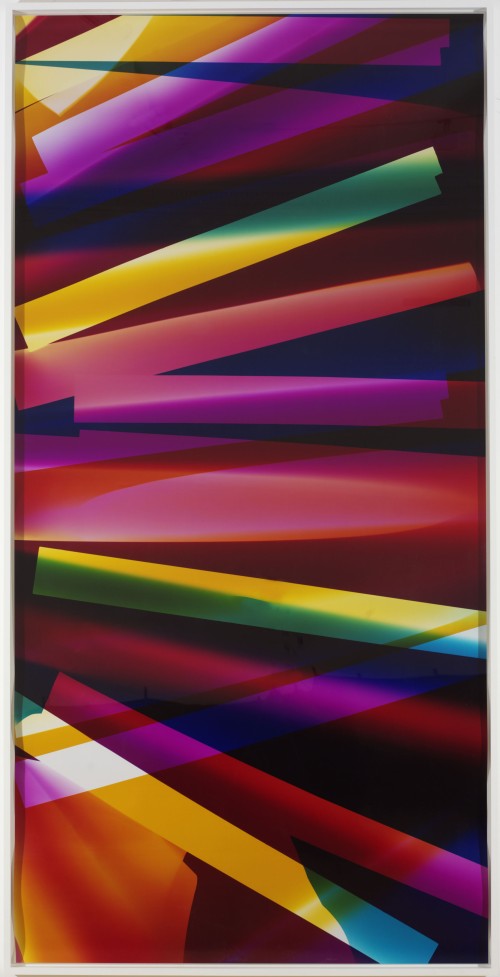 This exhibition with the British artist Walead Beshty (b. 1976) presents an overview of ten years of his photographic and sculptural work, recombining old and new pieces within site-specific installations which turn on questions of the in-between.

Walead Beshtys works remind us how important it is to appreciate the transitory nature of daily life, especially its gaps, its pauses, and its moments of in-betweenness. This in-between time has always been central to Walead Beshty’s work. In his early works the theme of ‘in-betweenness’ is literally represented in the sites he chose to photograph. His Excursionist Views (2001–2005) show failed, depopulated modernist housing developments that sit precariously between evacuation and demolition, Island Flora (2005) documents the plants, weeds, and vegetation contained within isolated highway medians that, left to their own devices, have grown unruly, while the series of photographs of abandoned shopping malls, titled American Passages (2001–ongoing), present the mercantile and capitalistic nightmare of empty, closed shops.

These three projects all confront the urban landscape as a problem of ‘in-betweenness,’ depicting locations trapped in a state of geographic and temporal limbo, neither fully abandoned, nor actively integrated into the urban context. More recently, this engagement with the in-between has grown into a means of production, making use of such mundane procedures as air travel or sending a package, activities that usually recede into the background of an artist’s productive life.

In tandem, Beshty explores various issues associated with photographic representation, specifically that of transparency, and the resulting works both revisit and complicate early modernist practices. While homages to influential figures such as László Moholy-Nagy can be found in his Pictures Made by My Hand with the Assistance of Light (2006)—which were based on an apocryphal story of a missing body of Nagy’s work—these references appear in more subtle ways in works such as Dust (2009) (2010), or Six Color Loop (CMYRGB: Irvine, California, July 16th 2008, Fuji Crystal Archive Type C) (2009). Beshty’s photograms attempt to demystify photography and mine the gaps in its historical narrative; the paper and its folds serve both as an expression of photographic materiality and as an exploration of photography’s technological development.

Transparency—how a work is produced and by whom—is also vital for Beshty, and since 2005 his works reveal their productive processes both in their form and in their titles. In Travel Pictures (2006/2008) he discovered how he could work productively with issues of chance within the production of photographs. After realizing how his unexposed film was affected by passing it through the high-powered X-ray machines at the airport, Beshty began to use travel as part of his work. What at first seemed to be simply discolored damage left on his film (a side effect of the Xray machines) developed into a multifaceted body of work in which the situations surrounding the work—the production or shipment of the artwork and the travel an artist engages in—were directly manifest, pushing his investigation of transparency into new territories.