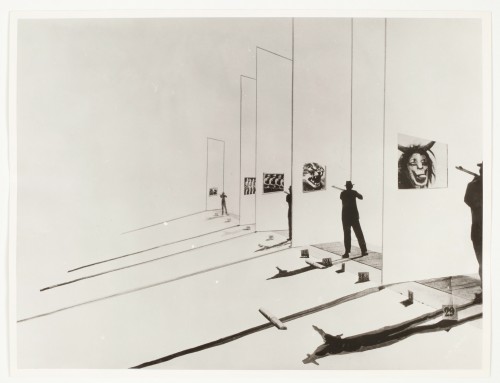 László Moholy-Nagy (1895-1946) is now considered one of the classic modern artists. He worked in many different techniques and media, such as painting, photography, sculpture, film, graphics and set design. Everything he did was based on his burning interest in the visual. In many ways he was a child of his times – the new, modern world that was starting to take shape at the beginning of the 20th century. In the inter-war period, society was characterised by a strong belief in the future and a fascination with the life of the new urban environment, with its hectic pulse, technology and industry. Malmö Konsthall’s exhibition of the works of László Moholy-Nagy presents and showcases his photographic images, films and graphic works.

Moholy-Nagy was born and grew up in Hungary, where he began to study law. At the outbreak of World War I he enlisted in the Austro-Hungarian army, and it was during the war that his interest in art was aroused. He began to draw. Once back in civilian life, it was not long before he gave up law in favour of art.

When he was 24, Moholy-Nagy emigrated to Germany after a short stay in Vienna. In his abstract paintings he explored the relationships between light, colour and form. His primary inspiration came from the Russian avant-garde: Constructivism and the Suprematists Malevich and Lissitzky. During the period 1923-28 Moholy-Nagy taught at the renowned Bauhaus School led by Walter Gropius. At that time the Bauhaus motto was “Art and Technology – a new unity” and the school was permeated by Gropius’s vision of the artist as a designer of mass-produced art. Together with Gropius, Moholy-Nagy designed and edited the series of Bauhaus books, a total of 14 books that functioned as the school’s manifesto.

It was during the 1920s that Moholy-Nagy began to be interested in photography as a form of technology. He was fascinated by being able to paint with light, and how technique – not the artist – creates the image. Moholy-Nagy was one of the first artists to experiment with photograms – images created without a camera by placing objects between a sheet of light-sensitive paper and a light source. These – his abstract shadow images – originated in well-known everyday objects.

He also worked with photomontage, in which he cut contemporary images out of magazines and newspapers and then combined them to form a new picture. Often he both drew and painted within these montages, and then photographed them – uniting the components forever into an image that can be reproduced from a negative. He called these photomontages “photoplastics”* to emphasise that it is the light that shapes the image.

Moholy-Nagy also used the new portable miniature camera to explore how photography – through its ability to record forms – can change and renew our perception of the everyday. Lines, patterns and shapes dominate his black-and-white photographs of the world and make us perceive reality afresh. He liked to use unusual camera angles – often taking the pictures from a bird’s or a worm’s eye view – as well as shadows and negative photos – in which the photographic negative is itself presented as the photograph.

Film was a medium that suited Moholy-Nagy because it could give life and movement to the photographic image. This dynamic, which mirrored the new, modern urban life, was exactly what he sought in many of his images. He made a number of documentary films between 1930 and 1946. The exhibition presents several of his avant-garde films.

The political situation in Germany forced Moholy-Nagy to move to Amsterdam in 1934, then to London in 1935 and two years later he emigrated to Chicago, USA. There he helped to found the new Bauhaus School. The school was closed shortly afterwards. In 1939 he opened his own school, the School of Design in Chicago, which subsequently became the Institute of Design and now forms part of the Illinois Institute of Technology. László Moholy-Nagy died of leukemia in 1946 at the young age of 51.

The works in this exhibition were chosen by Daniel Hug, László Moholy-Nagy’s grandson, in consultation with Malmö Konsthall. The exhibition includes a series of unpublished photographs from the artist’s travels through Sweden and Finland in 1931, as well as other photographic works that have never been shown before.