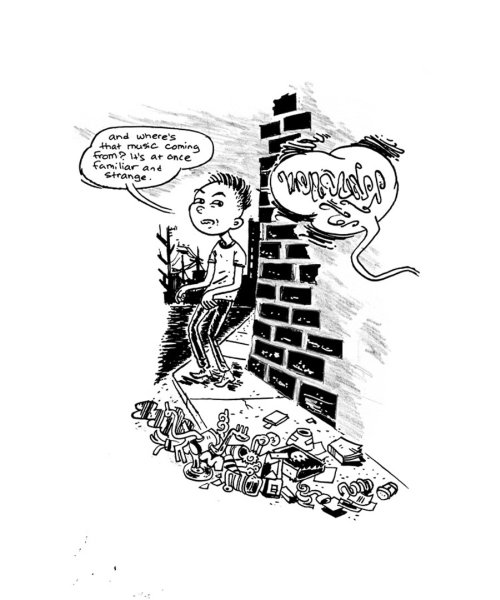 Trevor Alixopulos is Hawaii-born transplant to the Bay Area, raised in Sonoma County. He has been working in art comics and small press for the past ten years. First inspired by the 1990s zine explosion and the new wave of art comics in RAW and LOVE & ROCKETS, he started photocopying his first minis while still in his teens. From his first stapled satirical zines his artistic horizons have broadened to encompass long form graphic novels, experimental narratives and painting.

After producing his handmade comic QUAGGA for several years he was eager to work on a more ambitious scale and jumped at the chance to draw a graphic novel. His first, Mine Tonight (2006), was a deconstructive political thriller, set in the 2004 Presidential Election. Suffused with the overheated, paranoid atmosphere of the post 9/11 years, it attempted a romantic modern noir of Bush’s America. His second graphic novel, The Hot Breath of War (2008) again engaged social themes, but this time in an abstract manner, more lyrical than literal. A novel of short stories grouped around themes of passion and aggression, exploring the areas where people try and fail to connect, from the battlefield to the bedroom. The Daily Cross Hatch called The Hot Breath of War “A book that demands to be experienced.” It was nominated for an Ignatz Award for Best Graphic Novel and was listed on TCJ.com’s Top 100 Comics of the 00’s.

Alongside his longer novels Alixopulos has continued to produce small hand-made comics with a stapler at home, as well as working in watercolor and screenprints. His art has been featured in shows at Giant Robot, Gallery of Sea and Heaven, STUDIO Gallery and in ANTHEM Magazine. On the themes of his work today, Alixopulos stated, “…I’m interested in the play between narrative and iconic forms in comics. Comics stake out some common zone of understanding, while dramatizing those areas where understanding breaks down. I like this profane realm, where the word won’t go; language becomes cartoon, visual joke, enigmatic sign and heraldry.” Today he does occasional commercial illustration, works in a library and draws comics from his home in Santa Rosa, California.