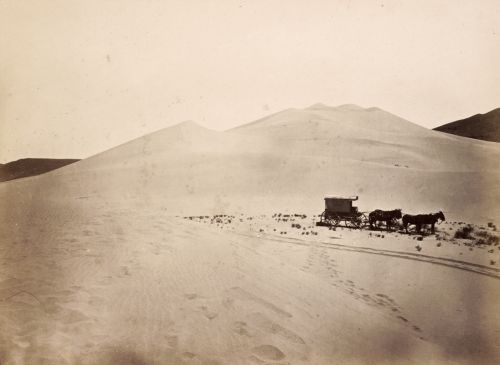 The King Survey of the Great Basin and Rocky Mountains, from 1867 to 1872, was the model for the other “great surveys” of the American West. Rare and iconic works by Timothy H. O’Sullivan, the King Survey’s official photographer, will be featured in an exhibition opening at the Art Institute of Chicago on Oct. 22. Keith F. Davis and Jane A. Aspinwall, respectively senior and assistant curators of photography at The Nelson-Atkins Museum of Art, organized the exhibition, Timothy O’Sullivan: The King Survey Photography. Davis will give a lecture in Chicago when the exhibition opens.

“O’Sullivan’s King Survey work is of central importance both to his career and to the history of American photography,” said Davis. “His images of mining operations, barren landscapes and unusual geological formations represent a powerful, raw vision of this little-known territory.”

There are 60 photographs in the exhibition, nine of which were borrowed from the American Geographical Society in Milwaukee, WI.; all the rest are from the holdings of the Nelson-Atkins. Davis and Aspinwall co-authored a major book that will accompany the exhibition.

“O’Sullivan is one of the giants of American photography. The images in the O’Sullivan exhibition have remained challenging touchstones in photographic history,” said Davis. “They are a perfect, if enigmatic, union of documentary and artistic intentions, fact and interpretation.”

Timothy H. O’Sullivan: The King Survey Photographs gives visitors a new appreciation of the visual history of the 19th– century American west while presenting some of the Museum’s rarest treasures for public view.