Through the Lens: Photography from the Permanent Collection 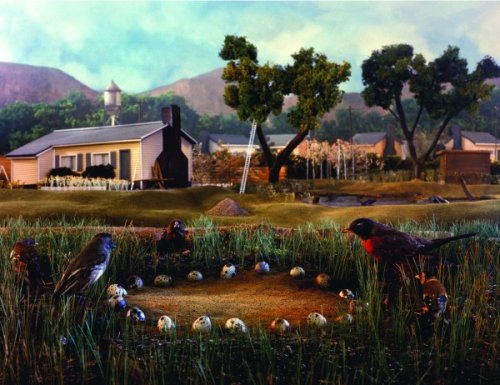 [ad#lb]
From its inception, photography has enticed scientists, artists and amateurs alike. Whether used for capturing historical moments or as an art form, the lens has played a significant role in human life. To fulfill this innate sentiment, Through the Lens: Photography from the Permanent Collection will be on view from June 27 through October 4, 2009 at the Lowe Art Museum, University of Miami. Curated by Lowe Associate Director, Denise M. Gerson, the exhibition features 100 photographs from over a thousand photographic holdings. The collection, unique in South Florida, spans the development of the art form from earliest years of its invention around mid-19th century to the present. Genres include early travel and portraiture, landscape, international modernism, the world of celebrity, documentary, and contemporary idioms.

Prints from the century of photography’s birth include examples of early photographic processes; including tintype, ambrotype, and daguerreotype, made by pioneers of the new medium. A fine portfolio of hand-pulled photogravures, created through an intaglio printmaking process, is part of a recent addition to the collection titled “The Golden Age of British Photography.” It includes prints by Francis Frith, Julia Cameron, and Fox Talbot. Modern masters from the first decades of the 20th century include Edward Steichen, Lewis Wickes Hine, Berenice Abbott, and Man Ray. Photography through mid-20th century comprises of prints by Edward Weston, Paul Strand, and Manuel Alvarez Bravo, among others.

Among the Lowe’s most remarkable holdings is an important collection of photographs by Walker Evans, dating from the 1920s through 1940s. Post-World War II photography features such notables as Gary Winogrand, Elliott Erwitt, Imogen Cunningham, and Arnold Newman. Newman’s photographs are the subject of a complementary exhibition at the museum.

Through the Lens: Photography from the Permanent Collection will be accompanied by a richly illustrated catalogue. The publication will feature an essay by J. Tomás López, University of Miami Professor of Photography.

Also on view, Arnold Newman: Photographic Legacy will showcase the Lowe’s collection of prints by the legendary American portrait photographer. Newman is renowned for capturing the essence of the work and personality of towering figures from the worlds of arts, letters, and politics. Newman studied at the University of Miami following the World War II, and in recognition of his contributions to photographic art form he received an honorary doctoral degree from the university in 1981.

An Unbroken Line: The Wu Guanzhong Donation Collection Baroque 1620 – 1800: Style in the Age of Magnificence