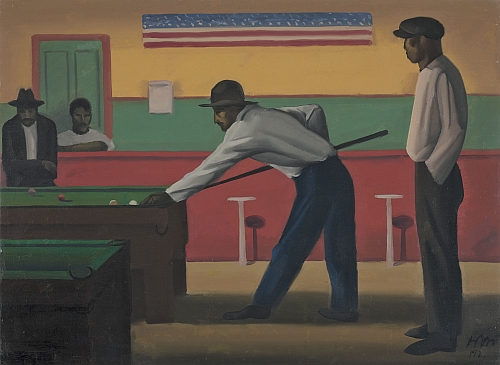 During the first half of the 20th century, the city of Chicago was shaped and reshaped by waves of migration and immigration as African Americans poured in from the South and newcomers arrived from Europe and Mexico. To celebrate these great migrations, the Art Institute of Chicago has organized the first exhibition to focus on the art produced by the diverse communities that made Chicago their home. They Seek a City: Chicago and the Art of Migration, 1910-1950 features more than 80 works created primarily by Southern- and foreign-born artists such as Margaret Burroughs, Eldzier Cortor, Walter Ellison, Todros Geller, Stanislaw Szukalski, and Morris Topchevsky–many rarely seen by the museum’s audiences. The exhibition draws on an extensive core of paintings, prints, sculptures, photographs, and books from the Art Institute’s permanent collection, and is enhanced by works borrowed from local private collectors and institutional lenders, among them the historically significant South Side Community Art Center and the Jane Addams Hull-House Museum. On view in the Modern Wing’s Abbott Galleries (G182-G184) from March 3 through June 2, 2013, They Seek A City is a survey of the city’s rich art of migration and demonstrates how Chicago became the polyglot, cosmopolitan place that it remains today.

The story of Chicago has always revolved around the movement of people. As a city made great by a network of railroads fanning out in every direction, Chicago developed in the 19th century as the Midwestern capital of industry and retail, eclipsing older, more established cities. After the catastrophic fire of 1871 destroyed over three square miles of downtown and nearby neighborhoods, civic leaders vowed to rebuild on a grander scale. Meatpacking companies such as Armour & Company drove the growth of the city, prompting a demand for labor that was filled by the arrival of thousands of immigrants and migrants. This rebirth also contributed to the cultural advancement of the city: Philanthropists such as Martin Ryerson, Henry Field, and Potter Palmer appreciated the value of a flourishing artistic community, and through their efforts, the Art Institute of Chicago developed its world-renowned collection and the School of the Art Institute established itself as a preeminent art academy.

The vibrancy of Chicago’s artistic scene in the period from 1910 to 1950 depended on the complex interchange of immigration, migration, industry, and the arts. European immigrants–particularly Eastern European Jews fleeing political and religious persecution–poured into the city between 1880 and 1920, when newly enacted Congressional immigration quotas began closing U.S. borders to many. As European immigration slowed, the city’s industries demanded new sources of labor, particularly during World War I. The demand was soon filled by new arrivals, particularly Southern-born African Americans and Mexicans, who became integral to the city’s growth.

They Seek A City celebrates the art produced by these newcomers. Immigration and migration, assimilation and alienation were topics that resonated with artists as they sought to establish new lives in a strange city. Although many of Chicago’s artists were social realists who worked in a figurative tradition, avant-garde art by European immigrants also played a role in the city’s changing cultural life. Despite sometimes-divergent methods, there was an overarching sense of artistic community, as artists crossed ethnic and racial boundaries, linked by shared institutional affiliations, political beliefs, and aesthetic outlooks.

By examining the art of the city through the lens of migration, They Seek A City not only traces Chicago’s rich and dynamic cultural development, but also explores some of the most important social and artistic questions of the early 20th century, including the intersecting issues of racial and cultural identity.

They Seek a City is accompanied by a fully illustrated, 116-page catalogue. The book, by Sarah Kelly Oehler, the Henry and Gilda Buchbinder Associate Curator of American Art at the Art Institute of Chicago, features 85 color and 10 black-and-white illustrations, plus five scholarly chapters that explore Chicago and the art of migration. The catalogue, published by the Art Institute and distributed by Yale University Press, will be available beginning March 4, 2013, at the Art Institute’s Museum Shop for $35.00.

Festival des Métiers – a Rendezvous with Hermès Craftspeople: Saatchi Gallery, London 22 May – 28 May 2013 Danh Vo Exhibition at the Guggenheim