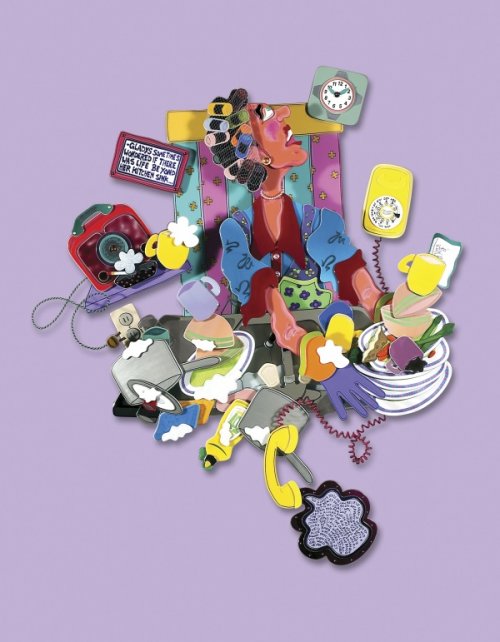 Have you ever had a day where everything just goes wrong?

On exhibit during ArtBasel Miami Beach and sponsored by the Myrna and Sheldon Palley Pavilion for Contemporary Glass and Studio Arts at the Lowe Art Museum on the University of Miami campus in Miami, Bernstein’s Kitchen Dreams pokes fun at, and commiserates with, characters wrapped up in the dramas of daily life.

One man plays tug of war with his dog over a shoe, another tries to untangle himself from a telephone cord, and a woman looks in despair at a clock as she struggles to clean a never-ending pile of dirty dishes. His hilarious characters are caricatures of overworked, overwhelmed and overbooked Americans.

Bernstein describes his characters as “a slice of Americana, going about their daily lives with the barest degree of composure. As they round the next corner looking warily over their shoulder they sigh, take a deep breath, and wonder what could possibly happen next? Mostly they hang on for the big ride, and hope for the best.”

Inspired by the wild activity at home with his wife and two young daughters, Bernstein’s work has an underlying humanity to which everyone can relate. The work of Red Grooms, Jack Levine and Gary Larson also have a profound affect on Ricky’s work, along with the sit-com world of 50’s television a time in which he was raised. Ricky also draws influence from such painters as Thomas Hart Benton, Reginald Marsh and Paul Cadmus. His narrative, collage-style wall reliefs have a distinct “pop-art” flavor.

Bruce Pepich, 20th century Curator of the Racine Art Museum says of Ricky Bernstein: “He makes us comfortable with amusing characters while simultaneously posing serious questions in these satirical comments on modern life. Whether parody, narrative or farce, the issues Bernstein poses are well worth our serious consideration.”

Bernstein’s work is widely collected throughout the U.S. and Europe, including the Corning Museum of Glass in NY, the Museum of Arts and Design, in NYC, and the Renwick Gallery in Washington, DC.

An illustrated exhibition catalog will available for purchase in the Lowe Museum Store.