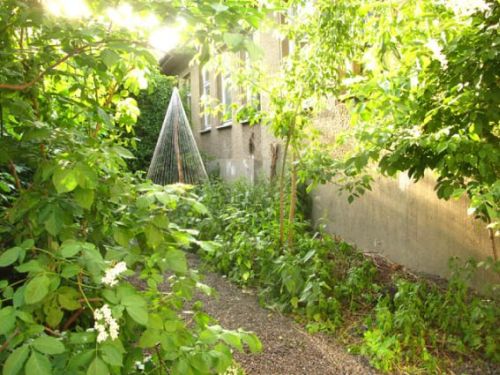 Tirana Art Center presents Petrit Halilaj’s “Astronauts Saw My Work and Started Laughing” with the support of The National Gallery of Arts in Tirana. The work will be inaugurated at the same day of the International Onufri Prize, this year curated by Alban Hajdinaj, himself an artist and curator, who is also part of the Artistic Research and Education Unit at the National Gallery of Arts. “Astronauts Saw My Work and Started Laughing” consists seemingly benign haystacks situated in the rolling countryside. After closer inspection, however, these haystacks revealed themselves as small huts with interiors just large enough for two people to lay together in solitude. The beans, planted around the base of the structure, refer not only to the ‘magic’ beans from the Jack and the Beanstalk fairytale (and all the promises of wealth and adventure they entail), but also provide a metaphor for the growth of a love, for which the hut was built.

Petrit Halilaj was born in 1986 in Kostërrc. Lives and works between Kosovo, Mantova and Berlin. After studying at Accademia delle Belle Arti di Brera in Milan he moved to Berlin working with Chert Gallery. In 2010 he was the superstar of Berlin Biennale, shocking the audience for his powerful into KW spaces. He has exhibited also at New Museum New York, Art Basel, Based in Berlin, Kunstraum Innsbruck, Stacion – Center for Contemporary Art Prishtina, Chert Berlin, Nomas Foundation Rome, Kunstverein Bonn and Westfälischer Kunstverein Münster.