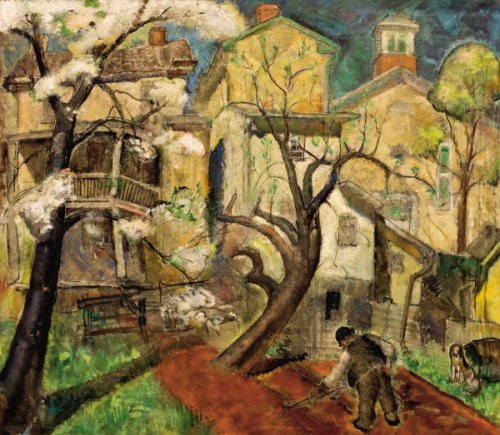 Ward’s work first came on the national scene when he painted the murals for the Trenton, NJ, post office as part of the Depression-era Works Progress Administration (WPA) program. They were among the first such paintings in the country, and he went on to paint three more. Ward once described his work as “paintings for people;” he pays tribute to the American spirit through images of everyday people that celebrate our common humanity.

“Charles Ward is an artist whose works and life deserve to be better known,” says David Leopold, Director of the Studio of Ben Solowey, and guest curator for the exhibition. “He is a part of the Impressionist tradition, but he goes beyond that. In many ways he is a bridge between Impressionism and Modernism in the region.”

Ward was a Carversville resident who delighted in creating modernist landscapes of his home region as well as of Mexico, which he visited in 1939 and 1954. He also painted insightful portraits and scenes of workers in both countries.

“He was as interested in the people in the landscape as the landscape itself,” adds Leopold. “There is a humanity in Ward’s work that is unlike anything else I have seen. He wasn’t content to turn out local genre scenes, instead, his works reveal the universal nature of everyday life.”

“Progress of Industry,” his first mural, was produced in 1935. In 1937 he completed two others, also for the Trenton post office titled “Rural Delivery” and “The Second Battle of Trenton”. In 1938 his mural “Cotton Picking” was installed in the Roanoke Rapids Post Office in North Carolina. Despite controversy that the work was too respectful of African Americans, the mural remained. Although he had studies for other WPA murals, he turned from the public to the personal in his work after creating the fourth.

He was accomplished in various media including watercolor, pastel, and printmaking. This retrospective explores the depth and range of Ward’s body of work, which resonates with empathy for humankind and the land he loved.

David Leopold, guest curator, will present a lecture on the exhibition on Tuesday, Nov. 17 from 1 to 2 p.m. in the Ann and Herman Silverman Pavilion. Members $8, non-members $15, includes museum admission. Advance registration requested.

David Leopold is an author and curator who has organized exhibitions for national and international institutions. He is director of The Studio of Ben Solowey, in Bedminster, and manager of the archives of Al Hirschfeld’s work. He recently edited American Presidents by David Levine, with a foreword by Bill Moyers (Fantagraphics, 2008).