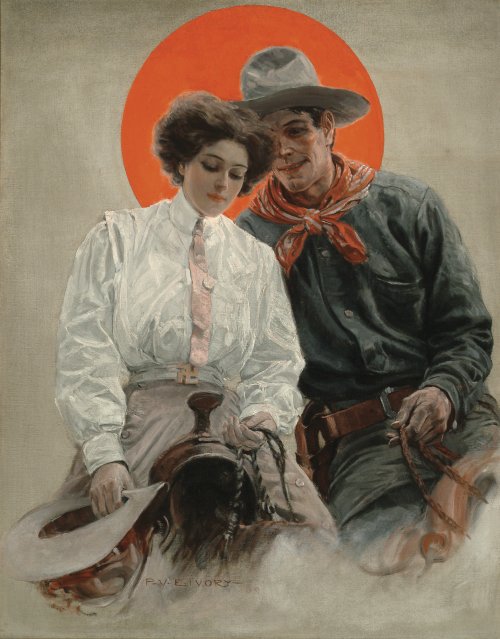 The Delaware Art Museum presents On Assignment: American Illustration, 1850 – 1950, featuring over 50 paintings and drawings from the Museum’s nationally recognized collection of original illustrations, on view now through January 2, 2011. These works demonstrate the range of styles and subjects that characterized illustrations in American books and magazines from the mid-19th to the mid-20th century.

Illustration differs from traditional painting in that it was work produced “on assignment,” or at the request and to the specifications of a particular editor. The original illustration, usually a painting or sketch, was reproduced in abundance. While working to fill specific needs, illustrators nevertheless exhibited enormous originality in their ability to dramatize a scene and capture the imaginations of diverse readers.

For working illustrators, assignments were anything but predictable. From classical literature to frontier adventure stories, romantic tear-jerkers to children’s fairy-tales, a good illustrator could do it all. The best were sought out by editors and admired by readers.

On Assignment offers illustrations from a variety of genres. Howard Pyle’s painting He lost his hold and fell, taking me with him (1909) comes from “The Grain Ship,” a thriller that appeared in Harper’s Monthly Magazine in March 1909. Bertha Corson Day, a student of Pyle, illustrated children’s stories, and two of her works from Where the Wind Blows are included. Gayle Porter Hoskins, who continued to live in Wilmington after studying with Pyle, has several works in the exhibition, largely from western stories. Multiple western illustrations by Allen Tupper True are also featured. Other genres represented in the exhibition include humor, literature, fashion, sports, and silhouettes.

Organizers and Sponsors
On Assignment: American Illustration, 1850 – 1950 was organized by the Delaware Art Museum.

This exhibition is made possible, in part, by grants from the Delaware Division of the Arts, a state agency dedicated to nurturing and supporting the arts in Delaware, in partnership with the National Endowment for the Arts.

The conservation of the paintings by Allen Tupper True in this exhibition was made possible by a generous contribution from the Delaware Art Museum Council. Founded in 1967, the Museum Council is a volunteer organization that raises funds to help support Museum programs.