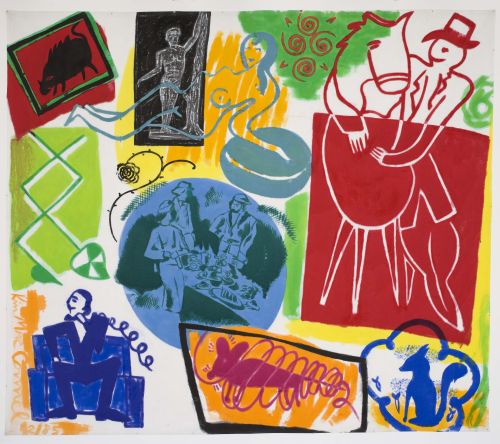 On Saturday, October 9, the Museum of Contemporary Art San Diego will open Collection Applied Design: A Kim MacConnel Retrospective, an exhibition that surveys four decades of work by San Diego-based artist Kim MacConnel. The first full-career retrospective to be presented in San Diego of this influential artist, Collection Applied Design will be on view through January 23, 2011, at MCASD’s La Jolla location.

Kim MacConnel is a painter who has engaged questions of abstraction, figuration, and decoration throughout his long career. The artist draws inspiration from a wide range of sources including found graphic images, patterned fabrics, Near Eastern textiles, Pablo Picasso, Henri Matisse, and the detritus that washes up on beaches. His work is informed by various experiences of travel, including his study of indigenous cultures and a self-conscious examination of the role of the tourist.

MCASD hosted MacConnel’s first major museum exhibition in 1976 and has since featured his work in both solo and group exhibitions. This retrospective seeks to go beyond a chronological examination of artistic development to evoke the experience of past exhibitions of MacConnel’s work. The show will take place at MCASD’s La Jolla venue, where the domestically scaled galleries are ideally suited to MacConnel’s work.

One portion of the exhibition will focus on MacConnel’s work from 1973 through 1978, beginning with his early interest in remixing abstract forms based on Near Eastern textiles. These works play against contemporaneous minimalist practices seen in the work of Robert Morris, Barry Le Va, and others, many of whom were also showing their work in La Jolla in the 1970s. During this period, MacConnel painted on patterned and textured fabrics including heavy synthetic brocades, transparent organdy, scraps of fabric, and flocking. Found graphic images and the notion of graphic images as a language were also strong sources of inspiration during this period.

An artist’s book that MacConnel created in 2004, entitled A Collection of Applied Design, documents the strong influence that Chinese clip art books had on MacConnel’s work during the 1970s. MacConnel has stated, “The booklets seemed to serve a purpose as an image reference for advertising, but the lack of referent or conventional order made a search more like a browse. The reading was poetic, like concrete poetry.” The fact that these graphic images could be read in any sequence was liberating to MacConnel, who applied these visual strategies to his own compositions. On a conceptual level, the possibility of reading and misreading visual codes was a rich area of exploration, which continues to the present.

Other bodies of work that will be addressed thematically in the exhibition include MacConnel’s assemblage sculptures constructed from objects and rubbish scavenged from beaches, and a series of paintings from 2007 that share the title Woman with Mirror; these works are inspired by both Picasso and Matisse.

The exhibition will be accompanied by a 100-page fully illustrated catalogue including an essay by guest author Richard Marshall and an interview with the artist by MCASD Curator Robin Clark. The volume will function as the definitive resource on the work of Kim MacConnel to date.