The road to Van Eyck

The exhibition ‘The road to Van Eyck’ with masterpieces from early Southern Netherlands and Burgundian painting from around 1400 will definitely take place.
Museum Boijmans Van Beuningen still does not have the 1.3 million necessary, but is ready – now that five hundred thousand has been promised – to take the leap and plan this exhibition for the end of this year. 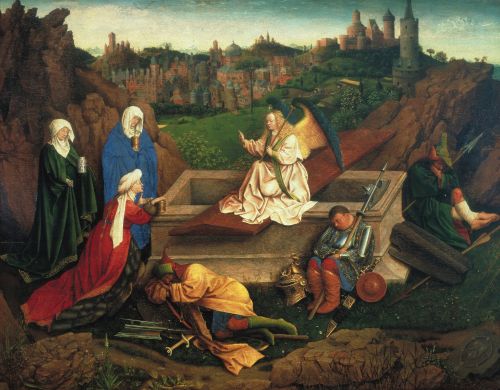 Thanks to the encouraging fund-raising results, the enormous interest and the quality of the exhibition, the risk is now acceptable for Museum Boijmans Van Beuningen to organise ‘The road to Van Eyck’ in the autumn of 2012; the expected costs are 1.3 million euro. Sponsor Robeco and Turing Foundation, several cultural funds and the income from the private support initiative ‘The circle of Van Eyck’ have already accounted for half a million euro. The increase in registration by private donors, the contributions from culture funds, plus the expected number of visitors, gives the museum sufficient confidence to go ahead.

Van Eyck’s sources of inspiration
In the autumn of 2012, Museum Boijmans Van Beuningen will cut across national and language borders and sketch, in a unique exhibition, a picture of art in the late middle ages in what is now the Netherlands, Belgium, Northern France and the Alsace. ‘The road to Van Eyck’ illustrates how and by whom Jan van Eyck (Maaseik ?, c. 1390 – Brugge 1441) was inspired to achieve his revolutionary and realistic style, as shown in his masterpiece ‘The Lamb of God’ from 1432. With his visionary artistic insights, Jan van Eyck offered his contemporaries a glimpse into paradise. The extremely valuable, centuries-old fragile works will come to Rotterdam from throughout Europe and the United States; the exhibition will be held from 13 October 2012 to 10 February 2013. A considerable number of exceptional works from this period are from the collection of the Gemäldegalerie of the Staatliche Museen in Berlin, partner in this project.

Paintings
The exhibition contains dozens of works that formed a source of inspiration for Jan van Eyck and his contemporaries. The core of the exhibition will be made up of no less than seven paintings by the master himself. The works on show are travel-sized paintings on panel, sometimes covered in precious metal, intended for private devotions. There are also drawings by Jan van Eyck on show. The diversity in the sources of inspiration also brings incunabula, miniatures, statues, tapestries and silver items to Rotterdam. Because of the high costs and the fragility of the pieces, ‘The road to Van Eyck’ will only be exhibited once, exclusively in Rotterdam.