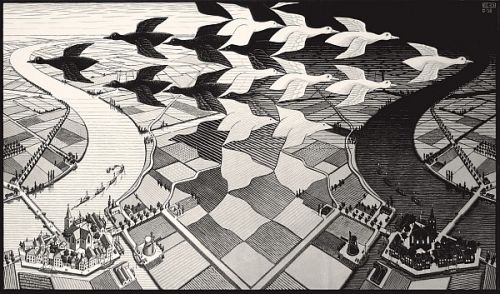 The exhibition sponsored and organised by the Palazzo Magnani Foundation in Reggio Emilia is supervised by an authoritative scientific Committee coordinated by Federico Giudiceandrea – a collector and expert of Escher’s works – and Luigi Grasselli – full professor of Geometry and deputy vice-chancellor of the University of Modena and Reggio Emilia.
The exhibition accounts for the production of the Dutch engraver and graphic artist, from the beginning to maturity, through no less than 130 works coming from prestigious museums, libraries and national institutions – among which the Gallery of Modern Arts in Rome, the Wolfsonian Foundation in Genoa, etc. – as well as important private collections. Palazzo Magnani will host woodcuts and mezzotints aimed at illustrating the construction of impossible worlds, explore infinity, reproduce the tesserae of planes and space as well interconnecting patterns gradually forming increasingly different shapes.
“…through my prints, I endeavour to provide evidence of the beautiful and orderly world we live in, which is no shapeless chaos, although sometimes it may seem so.
My subjects are often joyful: I cannot restrain from mocking our irrefutable certainties. For example, it is a pleasure to skilfully mix two- and three-dimension pictures as well as flat surfaces and space, or play with gravity… It is also a pleasure to see that many seem to enjoy this playful attitude and are not afraid to change their minds on rock-solid reality.”
This is the introduction to Escher’s early artistic research, illustrated by works such as Ex libris (1922), Scarabs (1935); the drawings influenced by Italian landscapes such as Tropea, Santa Severina (1931) where Escher provides a structure to space; Metamorphosis II (1940), one of the longer four-colour woodcuts ever made to tell a story through images, in which a scene leads to the next through subtly and gradually changing shapes; impossible pictures such as Up and Down (1947) and Belvedere (1958); the extraordinary tension between foreground and background in works such as Fish (1963).
In addition to his famous woodcuts – including absolute masterpieces such as Three Spheres I (1945), Drawing Hands (1948), Relativity (1953), Convex and Concave (1955), Möbius Strip II (1963) – the exhibition will also display numerous drawings, documents, videos and interviews with the artist aimed at highlighting the important role he played in the contemporary and subsequent historical and artistic context.
A section of the exhibition will be devoted to the comparison between Escher’s works and those of other important artists – who inspired him, were his contemporaries or followers – to understand how Escher’s choices complement a century-long artistic approach characterised by greater or smaller awareness and meeting different needs, starting from the Middle Ages, including Dürer, Piranesi’s dilated spaces, the harmonious lines of Art Nouveau (Viennese Secession, Koloman Moser) and leading to the avant-garde movements of Cubism, Futurism and Surrealism (Dalì, Balla).
If it is true that an artist’s value can be measured by his ability to influence other artists and the surrounding society, Escher was one of the greatest artists. His works were delivered from the press in his atelier to become gift boxes, stamps, greeting cards; they have been reproduced in comics and the covers of LPs, as at the time the 33 rpm records by famous pop singers were called. But this is not all. Escher’s great works also influenced other important artists of the 1900s to a lesser or greater extent, such as Victor Vasarely, the main exponent Optical Art, Lucio Saffaro etc. Even an American painter like disruptive Keith Haring owes part of his creativity to Maurits Escher. Through many documents and some twenty works, this section illustrates such aspects of Escher’s works to provide evidence of the correct cultural role played by the Dutch artist.
Moreover the exhibition is conceived as a “didactic machine” enabling visitors to “access” the creativity of such a unique artist. Impressive installations will enable visitors to enter the magic of Escher’s world. The relation between Escher and the “world of numbers” – i.e. both Euclidean and non-Euclidean geometry and mathematics – is apparent and has been thoroughly studied. None the less intriguing is his research on real and virtual space, i.e. “deceptive perspectives”. Last but not least, Escher proved that he knew well the laws of visual perception investigated by Gestalt.
These are possible – but not exhaustive – interpretations to understand the creative universe of an artist who, starting from those tenets, could fully exploit various means of expressions, perfectly blended to obtain a new and unprecedented approach that is still exciting and unique within the History of Arts. 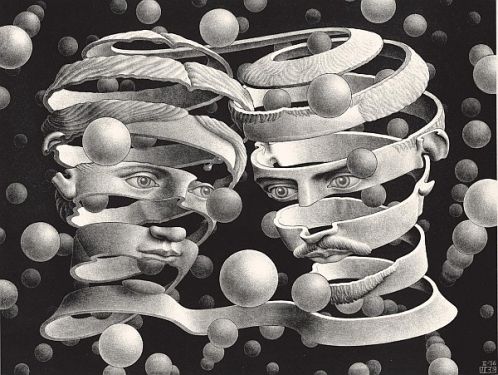