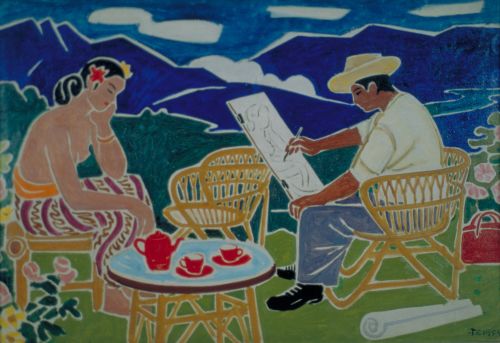 To commemorate the 100th year of the birth of Liu Kang, a highly regarded and respected Singapore artist, the National Art Gallery, Singapore is organising Liu Kang: A Centennial Celebration. Featuring 100 artworks, sketches, writings and artefacts, the exhibition invites art enthusiasts and visitors alike to explore the life and mind of the prolific artist known for being one of the founders of the Nanyang movement. Visitors can also learn about his artistic beliefs and his insights on art and culture.
The late Liu Kang (1911 to 2004) played a key role in the development of Singapore’s art scene. In 1952, along with Cheong Soo Pieng, Chen Chong Swee and Chen Wen Hsi, Liu made the historic field trip to Bali. The visual inspiration gathered then provided the
catalyst for some of his later works. In the eyes of many arts scholars, the Bali trip was regarded as a milestone event contributing to the birth of the Nanyang art style – an important juncture in Singapore’s art history.
Liu dedicated more than 33 years of his life to art education. He played a leading role in promoting the arts to the community and served as the President of the Society of Chinese Artists for more than a decade. Although the society was located in Singapore, it united artists from all across Southeast Asia, including Thailand and Vietnam. He was also one of the founding members of the Singapore Art Society, which warmly welcomed anyone interested in art, regardless of ethnicity or nationality.
Mr Kwok Kian Chow, Director of the National Art Gallery, Singapore, said, “Believing that art is ’the spirit and soul of a people‘, Liu Kang emphasised the importance of raising artistic standards and art appreciation within the community. A key player in realising the Nanyang School in art, he played a strong and significant influence on the next generation of artists in Singapore. We are happy to put together this exhibition to showcase his distinctive painting style and legacy.”
Launched in the conjunction with this exhibition is the Gallery’s second title in the Asian Artist Series featuring the artistic talents of Southeast Asia. Entitled Liu Kang: Colourful Modernist, the monograph presents Liu Kang in his voyage as an astute observer, commentator and visionary of modernity in Singapore art history. The publication offers fresh insights on the artist’s engagement with European and Chinese modernists in a Singaporean context. Previously unpublished archival photographs, along with 200 illustrations, are included in the publication.
For the first time, a range of limited-edition merchandise featuring Liu Kang’s colourful artworks has also been specially produced for sale at the Museum Shops. More information on the publications and merchandise is available in Annex B and C.
Liu Kang: A Centennial Celebration is the latest in the series of research exhibitions organised by the Gallery, following Realism in Asian Art, The Story of Yeh Chi Wei and Cheong Soo Pieng: Bridging Worlds exhibitions held last year. These exhibitions enable the Gallery to garner audience reactions and feedback, while fine-tuning our ideas and concepts. Organised by the National Art Gallery, Singapore and supported by the National Heritage Board, the exhibition will be on display at the Singapore Art Museum from 29 July to 16 October 2011.