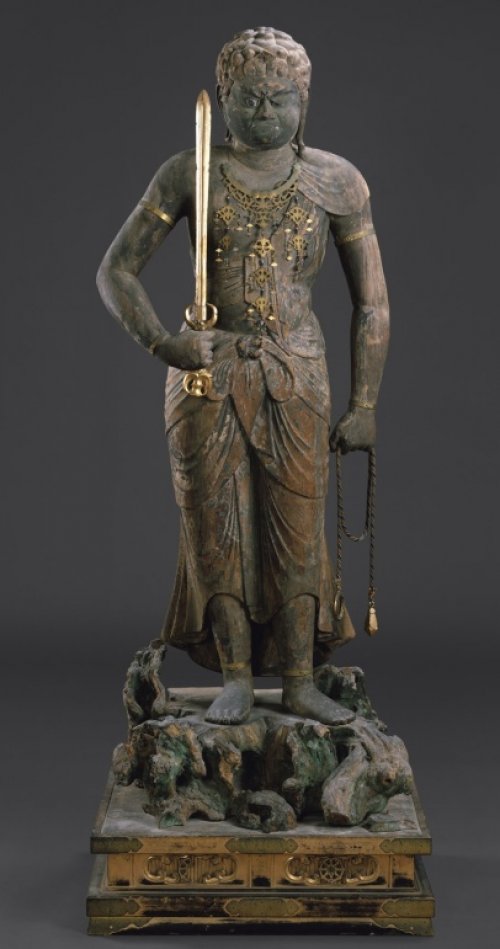 [ad#lb]
An impressive group of Japanese mandalas—graphic depictions of the Buddhist universe and its myriad realms and deities—are featured in an exhibition on view at The Metropolitan Museum of Art through November 29. Showcasing more than 60 magnificent works—painting, sculpture, drawing, metalwork, stoneware, textile,
and lacquer—drawn from major museums and collections in the United States, Japanese Mandalas: Emanations and Avatars illustrates the exceptional and complex world of Esoteric Buddhist art in Japan. Highlights of the exhibition include a set of monumental 13th-century mandalas on loan from the Brooklyn
Museum—this pair was selected by the Japanese government to be conserved in Japan. Displayed in tandem with iconographic drawings that explain the character and placement of the deities, the mandalas introduce viewers to the supreme Buddha Dainichi Nyorai, the principal buddha of Japanese Esoteric Buddhism, and
his innumerable emanations and avatars across the Buddhist cosmos.

The exhibition is made possible by The Miriam and Ira D. Wallach Foundation.

“The Brooklyn mandalas are of a type known as the ‘Mandalas of Both Worlds’ or ‘Ryōkai mandala’ and constitute the finest examples of this kind in the United States,”said Sinéad Kehoe, Assistant Curator in the Metropolitan Museum’s Department of Asian Art. “Although Indian in origin, the concept of the mandala arrived in Japan from China in the early ninth century. The Chinese prototypes for the first Japanese mandalas have long since vanished, and their form is carefully preserved in Japan alone. At the same time, Japanese mandalas evolved in entirely new directions unique to Esoteric Buddhism as it has been practiced in Japan, often incorporating Shintō elements along the way.”

Esoteric Buddhism, called MikkyōI in Japanese, has been the impetus for spectacular artistic developments in Japan since the year 806, when a Japanese monk by the name of Kūkai (774-835) returned from a voyage to China with the now-lost Chinese prototype of the paired cosmic diagrams known as the “Mandalas of Both Worlds.” After that point, Japanese religious art and culture exploded in myriad new directions. The original mandalas were copied and used as a powerful tool to spread the teachings of the Shingon (“True Word”), a school of Esoteric Buddhism founded by Kūkai, as well as the Esoteric teachings of the Tendai School founded by Kūkai’s fellow monk Saichō (767-822).

The exhibition is organized around three pairs of “Mandalas of Both Worlds” – one from the Muromachi period (1392-1573), consisting entirely of deities represented by Sanskrit letters; a pristine pair by Matsubara Shōgetsu from the Edo period (1615–1868) that once belonged to the powerful Tokugawa Shogunate; and
the superb pair dating from the Kamakura period (1185-1333), on loan from Brooklyn Museum. The exhibition also includes an important early Esoteric Buddhist sculpture Tobatsu Bishamonten, a deity isolated from the “Mandalas of Both Worlds” for individual worship, as well as a scroll from the 14th-century illustrated narrative handscroll A Long Tale for an Autumn Night, which tells of the ill-fated love affair between a senior monk and a beautiful novice.

The Museum will offer an array of educational programs in conjunction with the exhibition, including “Under the Gaze of the Stars: Astral Manuals in Medieval Japan,” a lecture by Bernard Faure, Kao Professor in Japanese Religion, Columbia University (November 7), and “Collectors and Collections,” a panel discussion with
collectors Sylvan Barnet and William Burto, moderated by Sinéad Kehoe (November 14).