Inventing the Shuttlecocks
May 9 – Aug. 16
Nelson-Atkins Museum of Art 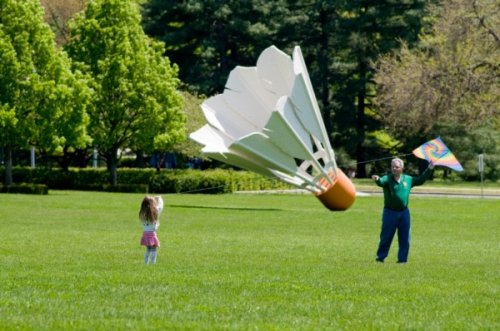 [ad#lb]
Inventing the Shuttlecocks, an exhibition that opens May 9, reveals the creative process that led American artists Claes Oldenburg and Coosje van Bruggen to create the four Shuttlecocks in the Kansas City Sculpture Park. The exhibition will celebrate the 15th anniversary of their installation and remain open through Aug. 16.

Upon their installation in 1994, the Shuttlecocks evoked admiration and provoked consternation.

“Some felt they were an affront to the Museum and everything it represented,” observed Jan Schall, Sanders Sosland Curator, Modern & Contemporary Art, at the Nelson-Atkins.

“Shuttlecocks expanded the definition of art, as did the work of Marcel Duchamp and Andy Warhol and before them Monet and Picasso. The Shuttlecocks proved that art is not only about serious subjects. It also can create wonder and be fun,” Schall says.

The public now has embraced the “fun” of the Shuttlecocks. Images of the sculptures are frequently used in advertisements, web sites and brochures, not just for the Nelson-Atkins but also for Kansas City and Missouri

Schall has assembled in the Project Space of the Bloch Building (gallery L8) the drawings, collages and models produced by Oldenburg and van Bruggen during the creative process that began formally in 1992.

The Sosland family commissioned the husband and wife team to create a site-specific sculpture for the Museum. The artists took inspiration from what then was called the Henry Moore Sculpture Garden. They also explored Kansas City and considered Midwest themes and imagery.

Many other influences are also referenced in the drawings, including the sphinxes at Liberty Memorial whose feathered wings shield their eyes from the horrors of war, the famous Kansas aviator Amelia Earhart, and the popularity of basketball, whose inventor James Naismith famously coached the University of Kansas team. One drawing in the exhibition, which shows a tornado/net with a basketball at its vortex, was a precursor to the Shuttlecocks.

Schall relates that a key moment came when Coosje (who died this year), was drawn to a painting in the Museum collection by Frederick Remington depicting an American Indian with a feather headdress.

Eventually, these varied images coalesced. The result was Shuttlecocks. The staid and solid Nelson-Atkins Building became the sagging badminton net over which they flew.

Today, the four 18-feet-tall Shuttlecocks, each weighing 5,500 pounds, are visual icons for both Kansas City and the Nelson-Atkins.

The Shuttlecocks were acquired through the generosity of the Sosland Family. This exhibition is supported by the Campbell-Calvin Fund and Elizabeth C. Bonner Charitable Trust for exhibitions. Midwest Airlines is the official airline sponsor.