Heat Waves in a Swamp: The Paintings of Charles Burchfield

Heat Waves in a Swamp: The Paintings of Charles Burchfield
Hammer Museum
from October 4, 2009 through January 3, 2010 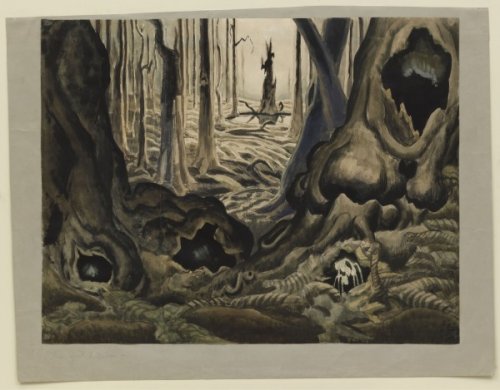 Charles Burchfield (1893-1967), worked almost exclusively in watercolor on paper and his primary subject was his experience of nature in his immediate surroundings – scenes from his backyard, vistas near his home captured and imbued with highly expressionistic light, at times creating a clear-eyed depiction of the world and at other times one that is wholly unique, mystical, and visionary. In 1930 Burchfield’s work was the subject of the first one-person exhibition at the Museum of Modern Art in New York (MoMA). His work has been collected by major institutions including: the Metropolitan Museum of Art, MoMA, the Whitney Museum of American Art, Smithsonian, National Gallery of Art and Chicago Art Institute. Despite this and the fact that he was also acclaimed by critics and known to a broad audience during his lifetime, Burchfield has been curiously under-appreciated and little-known or understood by a larger national and international audience.

“Central to our mission at the Hammer is presenting exhibitions that shed light on artists who have slipped under the radar – Lee Bontecou, Robert Overby, Milton Avery, and architect John Lautner are great examples. As was the case with these exhibitions, I think the work of Charles Burchfield will resonate deeply with our audience and, in particular, with contemporary artists,” said Hammer Director Ann Philbin. “Heat Waves in a Swamp also is a remarkable voyage for curator Bob Gober. Although it is now common practice for artists to curate exhibitions from the collections of museums, it is quite unusual for an institution to invite an artist to curate a major monographic exhibition of this scale. This experience with Bob has reaffirmed and deepened our mission as an artist-centric institution.”

Exhibition
Heat Waves in a Swamp will be the first major Charles Burchfield exhibition to be mounted on the west coast and the first in New York for more than twenty years. Arranged chronologically, it approaches Burchfield’s work with a new perspective facilitated in part by the curatorial sensibilities of Robert Gober. Working with Hammer coordinating curator Cynthia Burlingham, Gober has augmented a large selection of watercolors with the inclusion of extensive biographical material that continually infuses Burchfield’s own thoughts about his work and artistic practice. An obsessive collector, organizer, and archivist, Burchfield left a treasure trove of well-maintained sketches, notebooks, journals, and doodles spanning his entire career. This material is now part of the Burchfield Penney Art Center at Buffalo State College which houses more than twenty five thousand objects by this visionary American artist.

“I was interested in creating this exhibition because I wanted to take a deeper look at Burchfield: the man, the artist, and the work. How he lived his life, where he lived his life, how he made his works and the works themselves,” explains curator Robert Gober. “One way we’re trying to achieve this is through a reunion of two pivotal paintings, both were completed in 1943, although one was begun in 1917 and the other in 1934. These two paintings, The Coming of Spring and Two Ravines, were the works that took Burchfield through a creative crisis which he experienced as he was approaching 50 and the country was mired in the middle of World War II. He felt that his work had lost the intensity of his early nature identified watercolors and in his struggle to make works that he felt reflected the best possibilities for his creativity, he took early drawings and physically expanded them to make these two landmark works. To the best of my knowledge, it will be the first time that they will ever have been exhibited together.”

Although aware of the art of his time, Charles Burchfield spent his working life immersed in his own local environment in upstate New York, trusting and then challenging his creative instincts, often looking backwards in order to go forward, and steadfast in his belief of “the healthy glamour of everyday life.” His paintings vibrate with color and sound like visual symphonies where the humming of insects, rustling leaves, bells, moonbeams, and vibrating telephone lines are woven together to reveal the beauty and power of the American landscape. Side by side with his journals and notes these paintings explore both physical and psychological terrain. Edward Hopper, fellow artist and close colleague, once said that Burchfield’s work “is most decidedly founded, not on art, but on life, and the life that he knows and loves best.”

The Man and His Art
The exhibition begins with work Burchfield created in 1916 while living in Salem, Ohio and follows his career with special attention to transformative and often reflective moments in his life and work. For example, drawings from a 1917 sketchbook entitled “Conventions for Abstract Thoughts” represent human emotions with semi-abstract shapes that would appear in his work for years to come. This is followed by an entire room dedicated to the 1930 Burchfield exhibition at MoMA, which was the first solo artist exhibition in the museum’s young history. Twenty-seven watercolors originally featured in the MoMA show will be exhibited alongside the correspondence between Burchfield and then-MoMA curator/director Alfred Barr. This early period of Burchfield’s career also features a room with wallpaper from his time as a wallpaper designer combined with watercolors of industrial landscapes from the same period.

More than a decade later, Burchfield returns to his early expressionistic watercolors for inspiration. He begins to make monumental pieces created by literally transforming a number of small-scale watercolors from 1916-1918 — pasting large strips of paper around the early watercolors to increase their size and reworking these new compositions into unusually large ecstatic watercolor visions. This return to his roots results in an explosion of color and the exhibition culminates in the late, transcendental watercolors of the 1950s and 1960s. These monumental paintings are accompanied by a central vitrine containing the more than 10,000 handwritten journal pages that Burchfield kept throughout his life, from a young teenager until his death from a heart attack in 1967. These rich and complex journals demonstrate the extent to which this artist was continually immersed in rigorous self-reflection and the documentation of his artistic process.

Catalogue and Public Programs The exhibition is accompanied by a 160-page, fully-illustrated catalogue edited by Cynthia Burlingham and Robert Gober with essays by Robert Gober, critic Dave Hickey, Hammer Deputy Director Cynthia Burlingham, Burchfield Penney Art Center Head of Collections and the Charles Cary Rumsey Curator Nancy Weekly, and Burchfield Penney Art Center Research Assistant Tullis Johnson. Published by Prestel, the catalogue will be a major scholarly addition to the study of Burchfield and includes illustrations of both paintings and historical material from the Burchfield Penney Art Center in Buffalo.
The exhibition will also be accompanied by a full range of public programs at the Hammer Museum including panels, lectures, and more.

The exhibition is made possible by The Joy and Jerry Monkarsh Family Foundation.

Major support is provided by the LLWW Foundation and Lynda and Stewart Resnick. It is also realized through the generosity of The Horace W. Goldsmith Foundation, George Freeman, The Straus Family Fund, and The Fran and Ray Stark Foundation.

Additional support is provided by the Robert Lehman Foundation.

The catalogue is published with the assistance of the Wyeth Foundation for American Art.

The exhibition is organized by the Hammer Museum, Los Angeles, in collaboration with the Burchfield Penney Art Center, Buffalo State College.