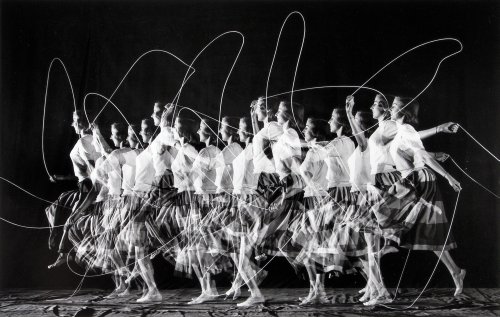 The Delaware Art Museum presents Faster than the Eye Can See: Photographs by Harold Edgerton, featuring 18 photographs produced at ultra high-speed, on view February 13, 2010 – April 25, 2010. Dr. Harold “Doc” Edgerton redefined the limits of vision, showing things invisible to the unaided eye by stopping time and making it possible to witness split seconds. Produced with a strobe light, which he invented, Edgerton’s exposures could be as brief as 1/1,000,000 of a second, allowing him to capture a bullet piercing an apple or a hummingbird in flight.

Published in Life magazine and National Geographic and displayed frequently at the Museum of Modern Art, Edgerton’s photographs have amazed millions since the late 1930s. And although he photographed in the service of scientific and commercial research, Edgerton appreciated the importance of aesthetics to create wonder and communicate ideas. For 25 years he labored to get the perfect picture of a milk drop and the coronet created by its splash—the resulting 1957 photograph is one of the most familiar images of modern visual culture. The enduring appeal of Edgerton’s photographs results from his combination of technological innovation and visual allure.

Fast Facts
* In 1931, Edgerton invented the stroboscope, which would evolve into the electronic flash used in most modern cameras.
* One of Edgerton’s photographs of a milk drop was included in the first photography exhibition at the Museum of Modern Art in 1937.
* Edgerton photographed celebrity athletes including ice skater Sonia Henie and boxer Joe Louis. His photographs of track meets and prize fights transformed sports photography.
* Edgerton won an Oscar for his short film Quicker’n a Wink in 1940.
* During World War II, Edgerton worked with the United States Army to produce aerial reconnaissance photographs of Germany and the beaches of Normandy at night.
* He collaborated with Jacques-Yves Cousteau to perfect underwater photography and film-making.
* Edgerton helped develop side-scan sonar technology, used to map the ocean floor and locate wrecked ships including the Civil War ironclad Monitor.
* In 1976, Edgerton participated in an (unsuccessful) expedition to locate and photograph the Loch Ness Monster.

Roppongi Crossing 2010: Can There Be Art? 23rd Annual Protégé Competition and Exhibition