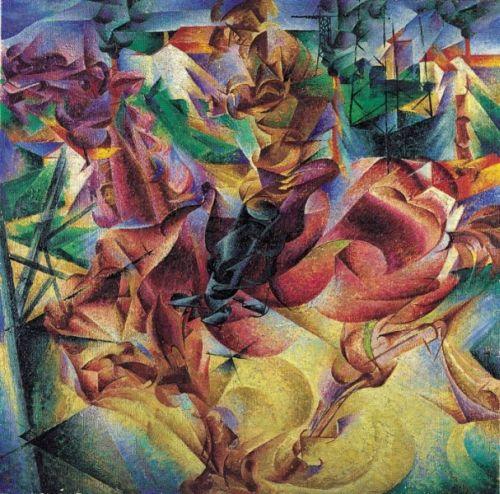 Milan, the rising city: the city where Futurism was born and where it lived out its exhilarating early years, is dedicating a dazzling exhibition to the centenary of this rebellious, visionary avant-garde movement. Staged by the Comune di Milano and Skira Editore, curated by Giovanni Lista and Ada Masoero, and produced by Palazzo Reale in collaboration with Skira and Arthemisia, the exhibition will take over the whole of the ground floor of the palace on this occasion, and represents the premier event in a packed programme of initiatives staged by the Comune di Milano, including theatre, film, dance and fashion happenings, making the city the capital of Futurism for the whole of 2009.

The exhibition presents a total of around four hundred works, more than 240 of which are paintings, drawings and sculptures, while the others range from paroliberismo to architectural drawings and designs, set design and theatrical costumes, photographs and book-objects, to elements from the realm of daily life: furniture, decorative art items, advertising and fashion, all bearing the innovative hallmark of Futurism.

Among the many exhibitions commemorating the centenary of the movement, this unique show documents the entire, vast operative scope of Futurism, highlighting its generous, to some extent utopian desire to redesign the full spectrum of human activity in an innovative vein. Examining Futurism in terms of painting and sculpture alone would present a distorted vision of the movement, obscuring what remains its unrivalled, defining trait.

Moreover, in view of the fact that Futurism was active not only in the famed 1910s, but for at least 30 years, the exhibition explores the full span of the movement, up to the end of the 1930s. The period covered extends to highlight the legacies that Futurism took up, on one hand, and on the other hand, those it left to forthcoming generations. It starts out from the last decade of the 19th century, documenting the visual culture where Futurism formed, and ventures into the second half of the 20th century, looking at the works of some of the artists of that period (Fontana, Burri, Dorazio, Schifano, the visual poets), who looked to Futurism, or paid an explicit tribute to it.
Just as the Futurists wanted to place the spectator “at the centre of the picture”, this full, momentous exhibition places the visitor “at the centre of Futurism”. Vibrant, dynamic and multifarious, the show reflects the essence of this extraordinary, unique avant-garde movement, which radiated out from Milan to the rest of Italy and Europe, absorbing a genuine throng of artists.
Out of the many artists who embraced Futurism, however, it was decided to include only those who made a significant contribution to the cause, either in terms of the quality of their work, or from the theoretical point of view: now that we have entered a new century, rather than merely documenting the movement, we are in the position to regard it from the point of view of history, and art history.

The sections of the exhibition
Before Futurism
The exhibition opens with an overview of visual culture in Milan at the end of the 19th century. We therefore encounter the nocturnal, visionary Symbolism – in the “Nordic” vein – of Alberto Martini, Romolo Romani and Luigi Russolo, and the sculpture of Medardo Rosso, who created instable forms that melt into the atmosphere, dematerialized by the light – elements that the Futurists drew on. We also find the more mystical Symbolism of Gaetano Previati, and the socially-committed art of Pellizza da Volpedo, represented by seminal masterpieces which sparked much debate in their day. And in this opening section we meet the five signees of the painting manifestos of 1910: Umberto Boccioni, Carlo Carrà, Luigi Russolo, Giacomo Balla and Gino Severini. There is ample space devoted to the works of these artists dating from their Divisionist period: as they themselves wrote in Pittura futurista. Manifesto tecnico (Futurist Painting. Technical Manifesto): “Painting cannot exist without Divisionism”.

F.T. Marinetti
The figure of Filippo Tommaso Marinetti embodies the turning point between the former period, rooted in the 19th century, and the blazing new era of Futurism: he was the detonator of the new course of Italian art, the demiurge of the aesthetic revolution destined to transform the first 30 years of the new century. After this section the exhibition is divided into decades, each identified in terms of its dominant aesthetic key.

The 1910s and Plastic Dynamism
The theme of dynamism heralded the advent in art of the defining characteristic of modernity. Art was therefore no longer static, alien to the flow of real life: it was now capable of incorporating life, as a vital force, and connecting with reality as it evolved. This period, which is illustrated in the exhibition by around one hundred precious works from important public and private collections, represents the most experimental stage of Futurism. We can observe the wide spectrum of approaches pursued by the different artists: whether springing from a dialectic encounter with Cubism (as we see in Boccioni’s works after 1912, and even earlier in Carrà), or from a personal evolution, as was the case with Balla, who came to pure abstraction as early as 1915, or connected to the ideas introduced by the new generations of Futurists, fresh material for the movement. These young Futurists include artists whose manifestos and theories contributed to the debate on plastic dynamism (such as Depero and Prampolini), as well as other artists, like Sironi, who briefly embraced the movement in his own personal way, or Soffici, in Florence, on a mission to innovate, or some of the members of the group Nuove Tendenze (above all Funi and Dudreville): all artists who made a significant contribution to Futurist experimentation, often in a decidedly autonomous manner.

The 1920s and Mechanical Art
Throughout the 1920s, when Europe was engaged in reconstructing and converting its industry after the Great War, Futurist art appears strongly characterized by a new need for order and clarity, very much in line with the widespread appeal for a “return to order”. Futurism therefore no longer stood in opposition to the other avant-garde movements in Europe, but in full, close accord with them, contributing to maintaining an open, international approach in art in a period darkened by political developments, with the onset and rise of Fascism. Balla, the old master ever-capable of coining new inventions, was working on paintings characterized by rigid formal structures, therefore belonging to the current of “machine art”, despite the fact that not a single machine appears. Depero, who had ushered in mechanical art in the mid 1910s, continued in this vein, giving rise to an original, personal current which brought Futurism in line with metaphysical art, generating singular hybrids steeped in a timeless, suspended dimension; Prampolini, with his magazine Noi, had always been open to Europe, and acted as the go-between with other international avant-garde movements, creating dense concatenations of planes, and then volumes. The Turin Futurists – Fillia, Diulgheroff, Farfa and Mino Rosso – who kept the theoretical aspect alive and to the fore in the second half of the decade, came up with exemplary works in the vein of mechanical art and the new cult of the machine, now viewed as an “idol”, bestower of geometric rigour and formal clarity.

The 1930s and Aeropainting
The works presented in this section embody an original idiom of modernity, developed in two directions: the physical and mental experience of flight. Springing from the brand new experience of perception in flight, Aeropainting opened novel horizons, challenging the canons of perspective that had always been the ineluctable basis of Italian art. Flight cancelled out the Renaissance notion of perspective, giving rise to a headlong vision, distorting spatial relationships, curving the horizon and sending man spiralling into a disorienting, even hallucinatory dimension.
While some artists looked down from above, others inverted this perspective, lifting their eyes to scan the mysteries of the cosmos. Flight thus became a mental experience, embodying the ancient utopia of the legend of Icarus, the mortal on a quest to explore the mystery of the divine. This is the compelling current of Cosmic Idealism, which then gave rise to the strand of Polimaterismo: in the context of this new “cosmic” awareness, Prampolini transfigured matter, charging it with new emotional values to the point of “spiritualizing” it.
The exploration of Futurism concludes with a number of important works belonging to the myriad of other fields that this generous avant-garde movement influenced: we therefore come to sections dedicated to the exuberant experience of Paroliberismo; to the experiments conducted in the field of photography and film; to the innovative work in music, set design and drama (with the opportunity to admire two extraordinary reconstructions of sets designed by Balla and Depero), and to the movement’s cutting edge architecture, decorative arts, advertising and fashion.
Lastly, we come to the section entitled After Futurism, which presents works by Fontana, Burri, Schifano, Dorazio and exponents of the Visual Poetry movement like Miccini and Pignotti, documenting not only how the post-war generation wiped the slate clean, but also the idealized but tangible, and often openly declared, tributes that these artists in their own ways paid to Futurism.
A screening room, showing a montage of excerpts of Futurist films, closes this impressive exhibition, which aims to offer an all-embracing exploration of the legendary history of the Futurist movement, on occasion of its centenary.