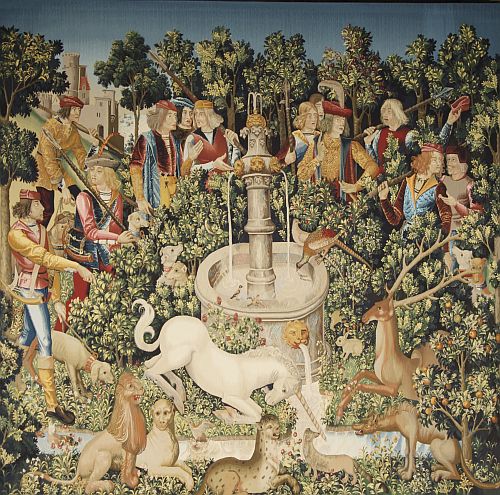 An exhibition celebrating the timeless skills of tapestry weavers from the medieval era to modern times by focusing on one of Britain’s most important royal refurbishment projects is to be held at The Fleming Collection in London from 17 April to 1 June 2013.
The show, Finding the Unicorn – Tapestries Mythical and Modern, will include one of a group of seven tapestries woven for the reborn 16th century Royal Palace at Stirling Castle in Scotland and the design for the last tapestry in the series. These will be shown alongside other work by West Dean Tapestry Studio, a tapestry by Henry Moore and an installation explaining how a Tracey Emin painting was translated into tapestry. The tapestries for Stirling Castle are one of the biggest weaving projects to be undertaken in Britain for two centuries and were woven by the West Dean Tapestry Studio, based in Sussex, working alongside Historic Scotland and the Historic Scotland Foundation. The Fleming Collection, at 13 Berkeley Street in Mayfair, has become an embassy for Scottish art in London and so is the ideal venue for the exhibition.
The stunning £12 million reburbishment of the Royal Apartments in Stirling Castle, where James V, King of Scotland from 1513-1542, and his wife Mary of Guise held court and their daughter, the ill-fated Mary Queen of Scots, spent some of her childhood, was opened by the Queen in 2011. Historic Scotland, which runs the Castle, returned the Royal Apartments to their original magnificence after years of research by archaeologists, historians and other scholars to ensure authenticity.
Work on the series of seven medieval tapestries, collectively entitled The Hunt of the Unicorn, for the Queen’s Inner Hall is now nearing completion after 12 years and the exhibition at The Fleming Collection will mark this important milestone. The Unicorn is Found, one of the tapestries woven by the West Dean Tapestry Studio, will form the centrepiece of the exhibition and it will be the first time that it has gone on show outside Scotland. It took three West Dean weavers, Caron Penney, Katharine Swailes and Jo Howard, a total of 16,647 working hours to complete this one tapestry over three and a half years. Tracy Chevalier, whose book Girl with a Pearl Earring was turned into an award-winning film, visited West Dean whilst researching her novel The Lady and the Unicorn. She writes in Scottish Art News, published by The Fleming Collection: “ Twelve years – that is proper medieval time, not 21st century time…….. I
was most struck by the serene atmosphere, a rhythm built from love and patience and a desire to make good, sound work using medieval techniques and embracing a medieval understanding of time.”
The Stirling Castle tapestries are new interpretations of originals, made in the Low Countries, where James V is known to have purchased tapestries. The originals are on display in the Cloisters Museum at the Metropolitan Museum in New York, where the weavers spent many hours researching the project. But the design for the final tapestry in the series, The Mystic Hunt of the Unicorn, presented Katharine Swailes with a particularly challenging project as it is based on two surviving fragments from a lost tapestry rather than a complete work. This involved much research and provided a rare opportunity to illustrate what the original medieval tapestry might have looked like. The design will be exhibited at The Fleming Collection for the first time and the tapestry will be completed next year.
The first tapestry to be woven at the West Dean Tapestry Studio, part of the Edward James Foundation based near Chichester, was Seated Mother and Child by Henry Moore in 1976. This was commissioned by Mary Moore, the artist’s daughter, and over the next decade a further 22 tapestries of Henry Moore works were woven there. It is therefore appropriate that Seated Mother and Child has been loaned to The Fleming Collection exhibition by the artist’s family. The art of tapestry weaving is as relevant today as it was in James V’s time and this will be demonstrated by the inclusion of two other modern tapestries in the show. One is Artemis by Pat Taylor and the other a triptych entitled Citrus Sinensis by Katharine Swailes, Jo Howard and Caron Penney.
Bringing the story of tapestries right up to date will be an installation composed by the Tapestry Studio showing the making of a tapestry of Tracey Emin’s painting Black Cat at West Dean in 2011.
Finding the Unicorn – Tapestries Mythical and Modern, co-ordinated and designed by Katriana Hazell, will also include some of the other pieces made by 21st century artists and craftsmen for the Stirling Castle refurbishment project. Among these will be a triptych altarpiece of the type that Mary of Guise would have prayed in front of and one of the giant Stirling Heads, carvings in oak made for the ceiling of the King’s Inner Hall. There will also be photographs, including a spectacular 3D laser scan of the castle, and a selection of the incredible research undertaken by the weavers for this unique project.