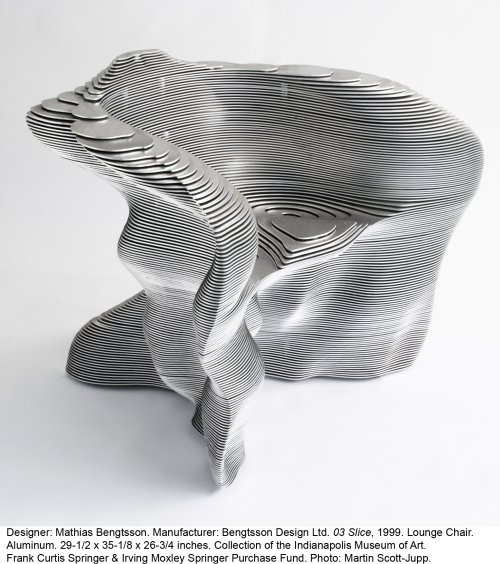 The High Museum of Art will host “European Design Since 1985: Shaping the New Century,” the first comprehensive assessment of Western European design from 1985 to 2005. The exhibition traces the evolution of design with nearly 200 works by some of the most influential artists of this era, encompassing furniture, glass, ceramics, metalwork and a broad range of product design created by 117 designers from 14 Western European countries. Additional works from this period will be incorporated from the High’s growing collection of contemporary design. “European Design Since 1985,” organized by the Indianapolis Museum of Art (IMA) and the Denver Art Museum, in conjunction with Kingston University, London, will be on view at the High from June 5 through August 29, 2010.

“This exhibition includes some of the most iconic designs of the time, instantly recognizable but rarely seen in person outside of major American and European cities,” stated Ronald T. Labaco, the High’s curator of decorative arts and design. “The High’s permanent collection includes some of the finest holdings of 19th- and early 20th-century American decorative arts in the country, and this exhibition gives us the opportunity to showcase the next chapter of design history.”

“European Design Since 1985” examines the development of the larger aesthetic movements of decorative and industrial design that transcended national borders and defined new relationships between art, design, and craft during this period. The exhibition also focuses on the two generations of designers that shaped these movements. The first generation, born after World War II, includes Ron Arad, Philippe Starck and Marc Newson. Born after 1960, the second generation has only recently begun to attract international attention and includes Jurgen Bey, Maarten Baas and Marcel Wanders.

The exhibition is structured around two larger themes: “design as art” and “design as industry,” or what are commonly known as postmodernism and modernism, respectively. Within these larger movements, there was a powerful dynamic of action and reaction that is reflected in the installation of the exhibition, which is divided into three sections: the initial postmodernist surge, the modernist reaction, and finally a postmodernist revival.

The designers of the postmodernist tradition primarily focused on producing objects that were more conceptual in nature and made in limited or studio production. The exhibition opens with two late manifestations of postmodernism that continued the influence of such design groups as Memphis and Studio Alchymia.

• Decorative Design was one of the first signs of globalization in design. Manufacturers hired designers from around the world, contributing to the advent of the designer as a superstar and brand name. As a stylistic movement, it is characterized by a revived interest in pattern, ornament and rich color on forms that were either high-style or vernacular in nature. This section includes Philippe Starck’s “J. – Serie Lang” armchair (1987), manufactured by Driade S.p.A, which dramatically balances a sophisticated upholstered form on a single rear leg.
• Expressive Design sought to revive the concept of design as sculpture. In this movement, the primary emphasis is on the form of the object, often richly colored or textured to highlight the materials or method of construction. One example is Ron Arad’s “Big Easy” (1989), made by One Off Ltd. It is a hand-hammered and welded steel chair that serves as an iconic example of this movement’s work in metal—a design that revels in its raw, gutsy power.

The designers of the modernist movement were primarily concerned with producing functional objects that could be industrially mass-produced. The second section of the exhibition showcases the three primary traditions that document the modernist resurgence in design: Geometric Minimalism, Biomorphism and Neo-Pop.

• Designers of the Geometric Minimal movement sought to recapture the essence of the modernist tradition by creating spare, sophisticated forms drawn from a vocabulary of simple geometric shapes. Jasper Morrison’s “Plywood” side chair (1988), manufactured by Vitra, is an iconic example in which a rectangular wooden side chair is reduced to the absolute minimum in terms of form and material—a reaffirmation that less is more.
• The soft, undulating forms of Biomorphic Design are derived from those found in the natural world. An iconic example is Marc Newson’s “Orgone Chaise” (1993), manufactured by Pod. This handmade luxury object illustrates Newson’s interest in using industrial technology to produce naturalistic shapes based on the inherent properties of the material—in this case, aluminum—with sensuous surface effects.
• Neo-Pop Design was a modernist interpretation of the influential Pop design movement of the 1960s and 1970s. The straightforward, light-hearted and playful aesthetic often blurred the line between “high” and “low” art, characterized by inflated or inflatable forms with bright colors or bold patterns as decoration. Jerszy Seymour’s “Pipe Dreams Watering Can” (2000), manufactured by Magis, demonstrates how an everyday object can be mass-produced as a work of extraordinary beauty.

The exhibition concludes with a look at the three postmodernist reactions: Conceptual Design, Neo-Dada/Surreal Design—both of which served to blur the lines between design, art and craft—and Neo-Decorative design.

• The Conceptual Design movement favored a more intellectual, rational and highly conceptual approach to recast design as a cultural force rather than simply a means of commercial production. With an emphasis on concept, there was no uniform stylistic approach by its adherents. Jurgen Bey’s “Kokon Double Chair” (1999), made by Droog, gives new identity and purpose to the found object—a pair of chairs—by covering them with a “skin” of PVC plastic.
• Neo-Dada/Surreal Design approaches design first and foremost as art. Drawing upon Dada/Surrealist traditions, the RADI Designers created a “Whippet Bench” (1998), which illustrates the interplay between image and volume, and between graphic design and three-dimensional shape. The design also alludes to the historical use of animal forms in furniture in a manner that is both tongue-in-cheek and Surreal by asking one to sit on the back of man’s best friend.
• Neo-Decorative Design is a blossoming revival of the earlier Decorative movement of the late 1980s and early 1990s that is characterized by an emphasis on decoration and historical forms through the use of bold color, pattern and texture. Tord Boontje’s “Red Veil” chair (2004), manufactured by Moroso, is as impractical as it is beautiful, with layers of gauzy red fabric erupting into a magical, fantasy-inspired piece.

Exhibition Tour and Catalogue
Organized by the Indianapolis Museum of Art, in conjunction with the Denver Art Museum and Kingston University in London, “European Design Since 1985” premiered in Indianapolis, running from March 8 through June 21, 2009. After traveling to the High Museum of Art (June 5 through August 29, 2010), it will be shown at the Milwaukee Art Museum from February 19 through May 15, 2011. The exhibition will be accompanied by an illustrated catalogue with essays by R. Craig Miller of the IMA as well as Penny Sparke and Catherine McDermott of Kingston University.