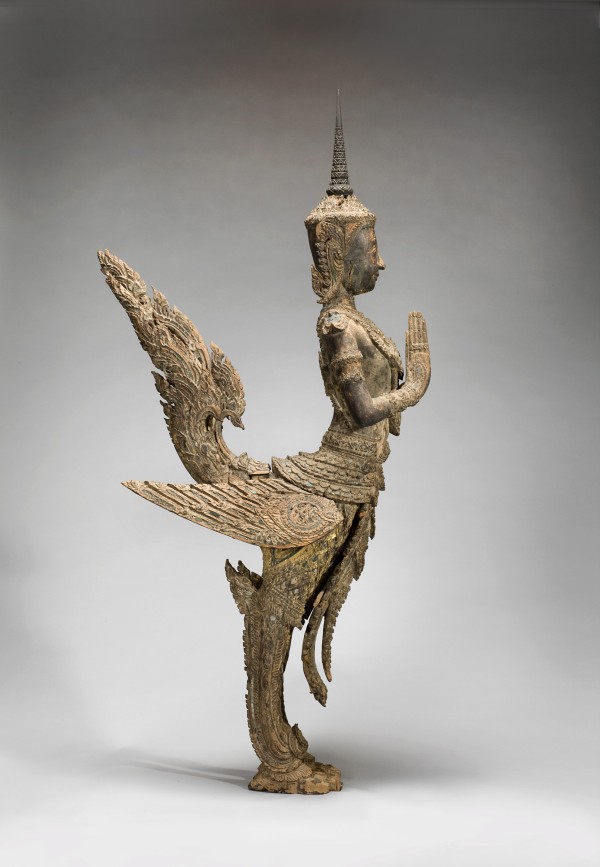 [ad#lb]
From October 23, 2009 through January 10, 2010, the Asian Art Museum showcases Emerald Cities: Arts of Siam & Burma, 1775-1950, the first exhibition of its kind to use a systematic approach to present artworks from this region and period. The exhibition features more than 140 artworks drawn exclusively from the museum’s collection, which is one of the largest and most important collections of nineteenth-century Siamese and Burmese art outside of Southeast Asia. On view are ornately carved furniture, lavishly decorated miniature shrines, gilded statues, elaborately illustrated manuscripts, colorfully detailed paintings, and mirrored and bejeweled ritual objects. The Asian Art Museum organized Emerald Cities and serves as the exhibition’s exclusive venue.

The collection was housed at Duke Farms – Doris Duke’s principal residence in Hillsborough, New Jersey – where for many years it remained largely unknown both to the public and specialists. Over two-thirds of the artworks on view in Emerald Cities are from this collection. The museum spent more than five years to complete an extensive conservation project to preserve and stabilize these very fragile artworks. Emerald Cities provides the opportunity for their public debut.

“All of the artworks on view in Emerald Cities originate from the museum’s extensive collection, demonstrating the quality and depth of the museum’s holdings from Thailand and Burma,” says Jay Xu, Director of the Asian Art Museum. “Through the efforts of Forrest McGill, the museum’s Chief Curator, and M.L. Pattaratorn Chirapravati, co-curator of the exhibition, Emerald Cities and its accompanying catalogue contribute both to scholarship and public appreciation of the rich and varied artistic traditions of Southeast Asia.”

“A feast for the eyes awaits visitors to Emerald Cities,” says Forrest McGill. “The writings and religious thought at the time emphasized the gorgeous, flowering, bejeweled, heavenly city of the gods. This view of a luxurious and fantastical Eden is evident through the artworks on view in the galleries which originate from the three great cities of the time—Bangkok, Mandalay and Rangoon.”

The artworks in Emerald Cities are presented by region, divided into three distinctive geographical areas: Burma; the highlands of Northern Thailand and Shan State, Burma; and Central Thailand. Within each geographical region, artworks are further categorized by their functions: Religious Art – including Buddhist manuscripts, sculpture, and objects for ritual use such as offering containers and ceremonial begging bowls; Mythology – including theatrical masks, costumes and puppets used for the dramatic productions of the epic of Rama; and Luxury Goods – including gold and silver vessels, furniture, and textiles.

Exhibition’s presentation in the Galleries:
The exhibition opens in Lee Gallery with three videos introducing important facets of the exhibition: Doris Duke and her Southeast Asian art collection; the conservation efforts undertaken in preparation for the exhibition; and a general introduction to Siam and Burma.

Artworks are presented in Hambrecht Gallery with the focus on Burmese art. One of the highlights is a lacquered and gilded Buddhist manuscript depicting scenes from the life of the Buddha (catalogue #3). This type of manuscript was often given to a monastery at the time when a family relation was preparing to enter the monkhood. Even up to the present day, it is customary for young men to become monks for as little as three months in order to bestow merit on their families. The manuscript on view depicts the scene of Prince Siddhartha (the Buddha-to-be) leaving his family to embark on his spiritual pursuit, a seemingly appropriate subject for the circumstances. The scene is placed in what would have been a contemporary Burmese royal court, with added embellishments that give it a fantastical quality.

Another highlight in the Burmese section is a rare, sequined, nearly-six-meter-long hanging that portrays the scenes of the legend of Rama (catalogue #19). Although its purpose is unknown, one explanation is that this narrative textile may have served as a backdrop for puppet performances. The royal costumes portrayed in this artwork are echoed throughout the exhibition, through actual costumes and those that appear on puppets and in other paintings.

Hambrecht Gallery also features artworks from Northern Thailand and Shan State, Burma. One of the first of these is a lavishly decorated miniature shrine almost two meters high from the highlands of Northern Thailand (catalogue #34). Made of lacquered and gilded wood, the shrine is adorned with mirrored glass and topped by several tiers of tapering roofs with prickly finials and a tiered parasol finial. Its structure is based on architectural forms of the time and demonstrates the tendency towards the elaborate and ornate.

The exhibition continues in Osher Gallery with a section devoted to artworks solely from Central Thailand, which accounts for more than two-thirds of the artworks on view in the exhibition. On the wall to the left of the gallery is a head of a Buddha image in stucco (catalogue #45) displayed alongside other Buddha images. In the 1790s the first monarch of the new kingdom of Siam had hundreds of Buddha images from other parts of his realm brought to Wat Phra Chettuphon, a new temple built in Bangkok under his reign. To make the styles of the images uniform, he had them covered with layers of stucco coated in gilded lacquer. In the 1950s when this style had gone out of fashion, the stucco was removed from these temple images and most fragments were presumably discarded. The stucco Buddha image on view is only one of two that was known to survive.

On an opposite wall in the gallery, a complete set of thirteen paintings – each reflecting one of the thirteen chapters that recount the next-to-last story of the previous lives of the Buddha (catalogue #71-83) – is on display. This sacred story is often recited at religious festivals. In each painting a chapter of the sacred story is depicted in the middle of the composition with other narratives depicted along the edges. The stories often add soap operatic visual elements depicting everyday dramas that perhaps kept the story interesting and relevant to the audience. A complete set of thirteen paintings telling this story is extremely rare. Having served its purpose, a set of such paintings after a recitation at a festival may have been put away with no provisions in place for their preservation, or dispersed individually or in smaller sets.

A popular wedding gift from the royal Thai family was a gold bowl (catalogue #121). The ornate example on view in Emerald Cities was presented to the daughter of Hamilton King, a U.S. diplomat in Siam, by Rama VI on the occasion of her wedding in 1921. It was personally delivered by a Siamese envoy to the King family in the U.S. It is decorated with three alternating motifs: a mythical eagle with human attributes, stylized foliage, and a celestial being with the hand gesture of adoration. The presentation of a traditional Siamese gift to a westerner indicates a strong sense of national identity and pride.

Emerald Cities closes by showcasing shadow puppets used for the enactment of the Rama epic, head dresses worn by dancers portraying Rama and Sita in classical Siamese dance, and wooden statues of mythical creatures that are half-bird, half human and inhabited an Eden-like forest in Buddha legend. Of these, the opulent and bejeweled head dresses particularly reinforce the sumptuous aesthetic found in artworks from Siam and Burma around the 19th century. This aesthetic in different variations is echoed throughout most of the artworks on view in Emerald Cities.

Conservation Effort
The efforts to stabilize, clean, and repair the more than one hundred vulnerable art objects in this exhibition have been going on for more than five years. The rare kinds of Burmese, Shan, northern Thai, and Siamese artworks on view, even though they may not be more than a century or two old, have often not survived in good condition. There are many reasons: the tropical climate of their homelands; the fact that some of these types of artworks were made for short-term use and no particular effort was made to preserve them later; and—for Burmese objects—the multiple wars of the last two hundred years. Even in Thailand and Burma, many artworks do not survive.

In 2004, thanks in part to a grant from the Institute of Museum and Library Services the museum surveyed its substantial Southeast Asian art collection to document its condition. Subsequent funding from the Doris Duke Charitable Foundation and other sources allowed the museum to undertake a major conservation effort to treat the artworks in need of care. The museum’s conservation team, including specialists in paintings, textiles, and other objects, spent some 6000 hours studying and photographing objects and planning and carrying out the treatments to preserve them and make them look their best. The main objective for the conservation project was preservation as opposed to complete repair to maintain the artworks’ authenticity. The conservation efforts also proved invaluable in dating the artworks and learning more about their history.

Related programs
In conjunction with Emerald Cities, the Asian Art Museum is presenting a host of related programs onsite including Burmese puppet performances by a marionette troupe brought from Mandalay, a family festival, a MATCHA evening mixer, lectures and more. On October 29 and 30, U.C. Berkeley is presenting a symposium—Object Knowledge: Art, Artifact and Authority in Southeast Asia—complementing the exhibition. Through the Community Speakers Program, the museum’s trained docent corps travel throughout the community upon request to present talks on the Emerald Cities exhibition to interested organizations. For a complete schedule of programs, visit www.asianart.org or call 415-581-3500.

Publication
A fully-illustrated catalogue entitled Emerald Cities: Arts of Siam and Burma 1775-1950 documents the exhibition. Published by the Asian Art Museum, the catalogue includes essays by: Dr. Forrest McGill, Chief Curator and Wattis Curator of South and Southeast Asian Art at the Asian Art Museum; M.L. Pattaratorn Chirapravati, associate professor of art history at California State University in Sacramento, CA; and Peter Skilling, noted specialist in archaeology, history, and literature of Buddhism in South and Southeast Asia. The museum gratefully acknowledges the underwriting of the catalogue by the Society for Asian Art and members of the museum’s Avery Brundage Circle. The catalogue is available at the Asian Art Museum store ($37.50 softcover,. $49.00 hardcover). 415-581-3600 or shop@asianart.org.

San Francisco magazine. The museum gratefully acknowledges the underwriting of the exhibition catalogue by the Society for Asian Art and members of the museum’s Avery Brundage Circle.