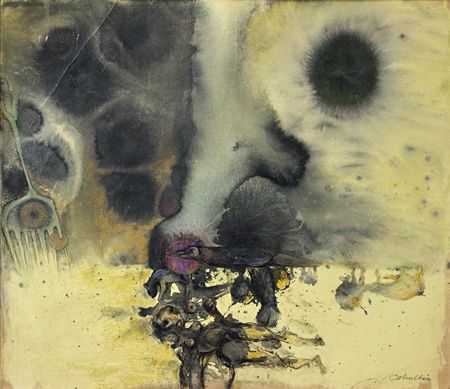 CO Hultén is a local pioneer who launched Malmö on the international art scene after the Second World War. This spring, Moderna Museet Malmö is featuring a major solo exhibition of the 95-year-old artist. This is a unique opportunity to study his output over 70 years, and the part he has played in Swedish art history.

Carl Otto Hultén was born in 1916 and has enjoyed a long and rich career as an artist. He is a major figure in Swedish art history. Early on in his career, CO Hultén became convinced that art was about spontaneous creation, not realistic depiction. His quest for alternative role models, and his demand that painting should generate its own reality, distanced him from formal, academic painting and led him towards genres such as cubism and surrealism.

The exhibition Anxiety and Craving, shown in the Turbine Hall at Moderna Museet Malmö this spring, spans nearly 70 years in CO Hultén’s artistic career. It begins with his expressive paintings from the late 1930s and leads up to his most recent painting from 2006, when he was 90. The exhbition starts with works from the past two decades, and proceeds with a chronological presentation, including objects by other artists, and ends with a few examples of CO Hultén’s advertising and graphic design and his activities as a designer and founder of the publishing house Image förlag. CO Hultén’s early fascination for contemporary African art prompted him to build a unique private collection, a selection of which will be included in this presentation. Altogether, Anxiety and Craving demonstrates the immense range of an oeuvre that regenerated established genres and challenged the manifestations of conventional art.

Together with his artist colleagues in the avant-garde group the Imaginists, CO Hultén made the international post-war art scene aware of Malmö. The exhibition highlights the impact of these artists on the development of the Malmö art scene through the forums of Galerie Colibri and the publication Salamander, whose activities were partly entwined. Galerie Colibri hosted artists who were hot in Europe but had not yet achieved recognition in Sweden, including Wifredo Lam, Max Ernst and Marc Chagall, who were also covered in Salamander. In this sense, Anxiety and Craving gives an insight into the role played by Malmö in introducing different, new and daring art to the public.

Putting CO Hultén’s oeuvre in context, other artists will also be presented, including members of the Imaginists and Cobra, and artists who exhibited at Galerie Colibri in Malmö or were closely associated with CO Hultén in other ways. These include Max Walter Svanberg, Endre Nemes, Asger Jorn, Anders Österlin and Gösta Kriland.