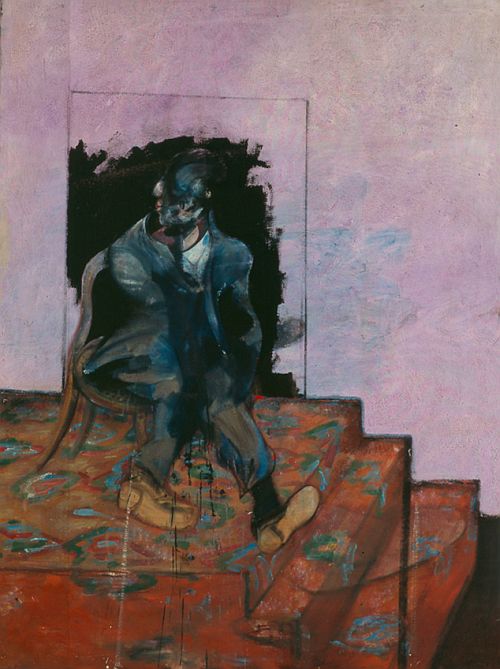 An exhibition exploring the diversity of contemporary Irish art practice through the work of 20 artists opens to the public at BOZAR Centre for Fine Arts, Brussels, on Thursday 28 February 2013 as a key event in the culture programme on the occasion of Ireland’s Presidency of the European Union supported by Culture Ireland. The exhibition also presents archive material, photographs, and unfinished paintings from Francis Bacon’s Studio.

Changing States: Contemporary Irish Art & Francis Bacon’s Studio draws on the impressive collections of Ireland’s two leading institutions for the collection and presentation of modern and contemporary art, the Irish Museum of Modern Art and Dublin City Gallery The Hugh Lane. This ambitious exhibition brings together the work of 20 contemporary Irish artists who have made significant contributions to art practice since 2000 and a fascinating exhibition of materials and unfinished paintings from the studio of Francis Bacon, one of the most important artists of our time.

The exhibition also presents Francis Bacon’s Studio, offering a fascinating insight into the creative process and working methods of one of the greatest artists of the twentieth century. Francis Bacon’s Studio was faithfully relocated to the Dublin City Gallery The Hugh Lane and opened to the public in 2001.

Contemporary Irish Art
Changing States serves to underscore the vitality and diversity of visual art in Ireland today. From multiple viewpoints, they examine the forces beneath the layered complexities of their political, social, economic and cultural territories, demonstrating a capacity to converse creatively with the present, responding to the distinct forces at work in their cultures. In an increasingly globalised society, their art questions ideology and tests alternatives, by addressing selfhood and collectivity.

The contemporary exhibition features expressive paintings by Brian Maguire and the large-scale colour photographs of Richard Mosse and Paul Seawright that share concerns with geopolitics and the experience of conflict. Works variously informed by social and political questioning, countercultural histories, the deconstruction of media and art history images include sculpture by Eva Rothschild and installations by Alan Phelan and Garrett Phelan for whom political and ecological activism is central.

The poetic and transformative possibilities existing in everyday life is invoked by artists Dorothy Cross, Nina Canell, Alice Maher, Niamh McCann, William McKeown, Katie Holten, Fergus Feehily and others. The exhibition features a number of film-based works by artists such as Willie Doherty who explores the complexities of place, identity and memory and John Gerrard who creates hyper-real studies of environments with unnerving banality. How images are constructed, transmitted and mediated is examined in Gerard Byrne’s large-scale film and photography installations.

Despite the diverse nature of the 20 artists’ work, reflecting a great variety of concerns, ideas and media, they have in common an attempt to construct compelling aesthetic universes, to convey their own intensity of experience and perception of the world.

On the night of the exhibition launch, Wednesday 27 February 2013 at 6.00pm, artist Orla Barry, winner of the BOZAR prize in the Young Belgian Painters Award in 2003, will present her live performance Mountain in the BOZAR galleries. This performance was premiered in October 2012 at the Playground Festival at STUK(Leuven) and continues to London and Amsterdam. Following the performance the set will be reconfigured as a sound installation for the exhibition featuring elements from the set combined with a specially designed sound work.

Francis Bacon Studio
Born in Dublin of English parents, Francis Bacon left Ireland in 1925, at the age of 16. Although he lived and worked in London, Francis Bacon’s early life in Ireland informed his sensibility and psyche which contributed to his waging war on the figure, resulting in an extraordinary new visual language. It embodies a fearless introspection into the nature of existence, a despair of the world countered by a ‘desperate optimism’.

In 1998 Francis Bacon’s studio in London, where he worked and lived until his death in 1992, was presented by John Edwards to Dublin City Gallery The Hugh Lane where it was painstakingly relocated along with the 7,500 studio items and opened to the public four years later. The relocation of the studio by the Hugh Lane is recognized as a ground-breaking initiative in conservation, archival and curatorial practice. Photographs by Perry Ogden of Bacon’s studio and living spaces provide the last view of the studio before the Hugh Lane team removed it to Dublin.

The studio provides a unique portrait of Francis Bacon, his thought processes and working methods. Studio items such as the manipulation of photographs including those of John Deakin, Peter Stark and Peter Beard; reproductions of Muybridge’s pioneering studies of the human figure and animals in motion; images torn from books, magazines and newspapers of skin diseases, war atrocities, boxers, wildlife, art, lovers and friends all of which are of intense interest and relevance in the field of contemporary art practice. The archival systems and methodologies created by the Hugh Lane for Bacon’s archive prompt questions as to management of meaning and the role of the archive as a means of inquiry in contemporary art.