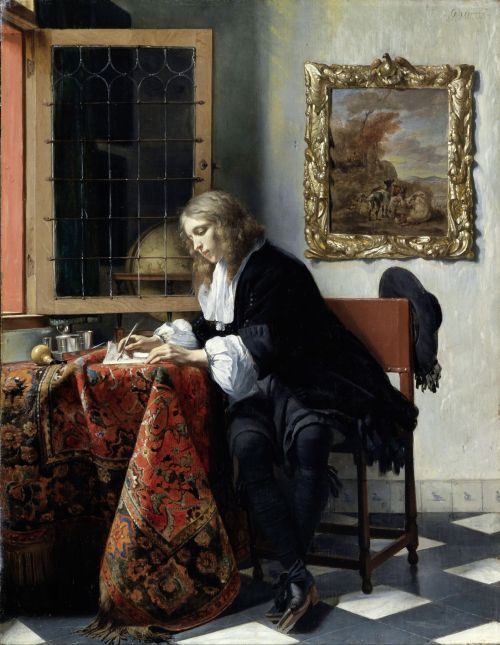 This autumn at the Rijksmuseum Amsterdam the work of Gabriel Metsu (1629- 1667), one of the most influential Dutch genre painters of the 17th century, will be put back in the spotlight. Metsu’s paintings beautifully depict everyday life during the Golden Age, with scenes such as a young man writing a love letter, a kitchen maid peeling an apple and an old man raising a glass. Despite his relatively short life, Metsu was one of the most popular painters of his time and his paintings were sold at high prices. In the 18th and 19th centuries, Metsu was more popular than Vermeer, whose paintings were sometimes even attributed to him. The Rijksmuseum has brought together over 35 of his best paintings from museums across the world and private collections, including works which were recently rediscovered and brought back to the Netherlands, in some cases after more than 250 years. Metsu’s works will be on display in the Rijksmuseum from 16 December to 20 March 2011.

Despite his untimely death, Gabriel Metsu produced a number of works which to this day are considered some of the best paintings from the Golden Age, such as The sick child (Rijksmuseum) and Man writing a letter and Woman reading a letter (National Gallery of Ireland). Even during his lifetime, Metsu’s paintings were sold at high prices to collectors in the Netherlands and abroad. In the 18th and 19th centuries, his fame reached great proportions. During this period, paintings by Johannes Vermeer, which today are world-famous, were sold as works by Gabriel Metsu. Along with Vermeer, Jan Steen, Gerard ter Borch and Pieter de Hooch, Metsu was one of the leading genre painters of the 17th century. With his unique feel for detail and materials, Metsu’s paintings of everyday scenes offer us a splendid glimpse into the lives of the Dutch, their clothing and activities during the Golden Age.

Born the son of a painter in Leiden, Metsu began his career in his birthplace, where he primarily painted large-scale biblical and farcical scenes. In search of a larger market for his paintings, he moved to Amsterdam shortly after 1650, where he began specialising in depictions of intimate, everyday scenes, inspired by Gerrit Dou and Gerard ter Borch, including street merchants, kitchen maids and people drinking and smoking. In the 1660’s his style became more refined and he began painting more and more scenes of the well-to-do and their pastimes, such as young men and women exchanging love letters, musical groups and people hunting. The similarities to works by Johannes Vermeer were clearly visible during that time. Metsu died in 1667 at the age of 37.