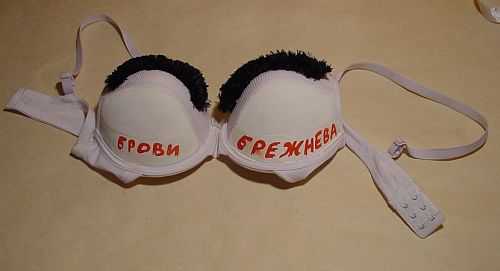 MMOMA is honored to present an exhibition of works by Andrei Bilzho, a well-known cartoonist, a painter, an artist who made several animated cartoons, an essayist who used to be a psychiatrist.

Bilzho became aware of his penchant for caricature while going to a medical school. Fortunately for Bilzho, his medical profession and his hobby didn’t clash. As a result, a number of publications began showing interest in his works. In the meantime, Bilzho was acquiring skills in the field of graphics. He took up painting later on. For sixteen years, Bilzho was a staff cartoonist with the newspaper Kommersant. Afterwards, for nearly five years he drew cartoons for another Russian newspaper called Izvestia. Bilzho quit after realizing that the newspaper’s editorial policy had become at odds with his artistic freedom. These days Bilzho posts his drawings and commentaries in his personal blog at the radio Ekho Moskvy web site. His works are also printed by the magazines Dilenant and Russki Pioner. Books containing his drawings, writings and photographs are published on a regular basis. It’s hard to get by without taking an ironic stance on life and oneself, and therefore Bilzho keeps on “rendering habitable” his artistic world in a cheerful manner, like a good doctor should do. He’s doing his job with confidence. Fighting shy of any broad statements, Bilzho is busy knocking down the partitions between the genres as he shows his utmost disrespect to the hierarchies of culture.

Petrovich (second syllable stressed) is arguably the most popular cartoon character Bilzho has drawn so far. Petrovich is the composite image of a low ranker belonging to the post-Soviet reality. Petrovich is the one who Bilzho makes look either naïve or kind or wicked and obnoxious or even beaten up and betrayed now and then. The Russian writer Alexander Kabakov put it like this a while ago,” Petrovich – a dreadful and great offspring of Dr. Bilzho – will be remembered till the end of time…. The character simply personifies the whole Russia, which is grand and wretched, funny and horrendous, the motherland held so painfully dear that it makes you want to throw up blood. Petrovich is a collective name for all of us, each of us is Petrovich insofar as you allow him to be or let him grow in your system: a jaunty slob and wise man, a mentally retarded arguer and quipster. Petrovich is Petrovich. And who’s not Petrovich doesn’t exist at all.” At the MMOMA exhibition, the above character of Bilzho’s oeuvre will look somewhat different. Petrovich will become a larger figure, no longer fit for “anecdotes on paper”, which are made for newspapers and magazines. He’ll step outside the traditional frames enclosing the works.

It’s worthy of notice that the Petrovich cartoons are just one of the parts making up the exhibition. Bilzho’s paintings dating back to the late 1980s and the early 1990s, and a series of self-portraits will fill up the entire floor of the MMOMA at Yermolaevsky Lane. The works to be displayed on the other floors comprise the following: several series of graphics (ЧБ, Acuity of Vision, Food); a collection of brasseries designed by the artist (Brezhnev’s Eyebrows, V. Putin’s Eyes, Belka and Strelka etc.); videos; home decoration items (a bed with bedclothes, a table with one-of-a-kind tableware. The latter were produced in limited series, and the tableware on display at the MMOMA is the only one currently located in Russia.

The legendary Soviet car VAZ 2101 or Zhiguli a.k.a. “Kopeika” (Russian for “one kopeck”), hand painted by Bilzho, will be exhibited in one of the museum halls. Songs performed by the artist are going to be background music for the exhibition.