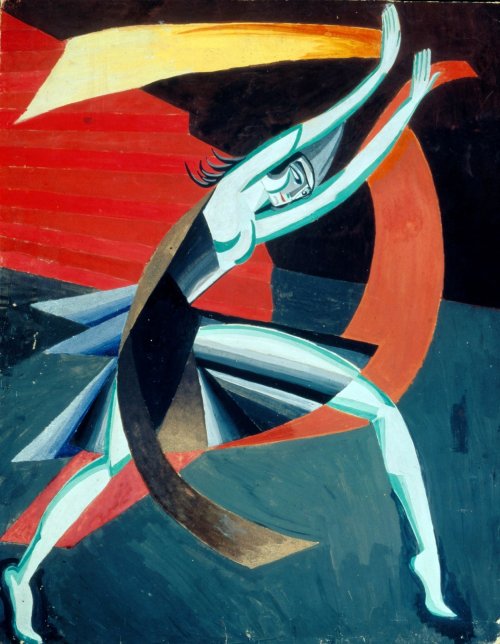 An unprecedented retrospective exhibition of works by Alexandra Exter hosted by the Moscow Museum of Modern Art is a truly remarkable event. Alexandra Exter, one of the ‘amazons’ and brightest stars of the Russian avant-garde, took part in most significant shows of the new art, including exhibitions of ‘Jack of Diamonds’ group and ‘Union of Youth’, ‘№ 4’ and ‘Tram B’, ‘Shop’, ‘5×5=25’ and so on. One cannot imagine innovative Russian art of the early 20th century without this artist’s oeuvre.

Alexandra Exter was the originator of such a crucial trend in Russian art as Cubo-Futurism, a characteristic ‘Russian’ version of Futurism reflected in numerous abstract pieces, still-lives and townscapes. Exter was the conductor of new ideas in Russian painting, as she familiarized Russian viewers with the latest developments of Parisian avant-garde. As she was spending a lot of time in Paris, Exter was friends with Pablo Picasso, Fernand Léger, Robert and Sonia Delaunay, Guillaume Apollinaire and many other brilliant figures of the time. She promoted their creation in Russia and, in her own work, demonstrated ways for Russian artists to adapt their discoveries.

Alexandra Exter contributed to the success of Russian theatre scene: three productions of the Chamber Theatre in Moscow that she designed – ‘Thamyris the Citharist’, ‘Salome’ and ‘Romeo and Juliet’ – are noted in the history of art as true masterpieces marked by costume and stage designs of amazing beauty. Other aesthetic landmarks in design of the time were Exter’s famous costumes of Martians made for ‘Aelita’, Yakov Protazanov’s film. Apart from that, Exter designed some exquisite fashion items and even uniform for the Red Army.

So it happened that, unlike many of her art contemporaries, Exter never had a serious comprehensive show, a kind of show that would have a distinctive concept based on extensive scientific research, a show that could fully represent her versatile art. The project of the Moscow Museum of Modern Art is the first large-scale retrospective of Alexandra Exter, allowing to comprehend creative discoveries of this leading figure
of the Russian avant-garde. The display includes paintings, graphic pieces, costume and stage designs, as well as unique manuscript books (livres manuscrits) never exhibited before. For the first time ever, theatre works by Alexandra Exter will be on view, including 60 pieces from the collection of A.A. Bakhrushin State Central Theatre Museum.

Alexandra Exter’s oeuvre equally belongs to France. Since the 1910s, Exter was involved in many important Paris exhibitions, such as the famous Salon of the Independents. Her art was appraised by prominent French critics – Guillaume Apollinaire, Waldemar George, Maurice Reynal and others. That is why it is so important to realize this project now, during the Year of Russia and France. The Paris years of Alexandra Exter (after 1925) were never shown in Russia in full scope, and this retrospective will demonstrate some works of that period.

The exhibition is curated by Georgy F. Kovalenko, PhD, head of the Department of 20th-Century Russian Art at the Scientific and Research Institute of the Russian Academy of Arts, and leading research fellow of the State Institute of Art History. Kovalenko is among the main Exter biographers and an authoritative expert in her art, author of two monographs and numerous articles published in Russia and abroad.
The exhibition space is designed by Boris A. Messerer, widely known artist and stage designer, President of the Moscow Association of Theatre, Cinema and TV Artists.
A voluminous catalogue is being prepared for the exhibition. The book will include a monographic essay, some rare or unpublished manuscripts and archive materials, a bibliography, a list of exhibitions and many reproductions of works by Alexandra Exter.