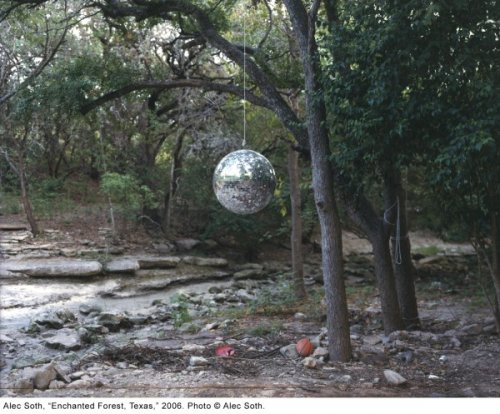 [ad#lb]
The High Museum of Art has commissioned twelve new works by Minneapolis-based photographer Alec Soth for the Museum’s “Picturing the South” photography series. For this distinctive initiative, the High commissions established and emerging contemporary photographers to produce work inspired by the American South.
Past participants include Sally Mann, Dawoud Bey, Richard Misrach, Emmett Gowin and Alex Webb, whose commissions have all been added to the High’s permanent collection.

For “Picturing the South” Soth produced a series of twelve large archival pigment prints exploring spiritual and hermetic life in the rural South. The first works by the artist to enter the High’s collection, the photographs will premiere in an exhibition at the Museum this summer. “Alec Soth: Black Line of Woods” will be on view at the High from August 8, 2009, through January 3, 2010.

“This initiative offers a rare opportunity to add twelve new works by Alec Soth to our collection,” said Michael E. Shapiro, Nancy and Holcombe T. Green, Jr. Director of the High Museum of Art. “The pieces acquired through ‘Picturing the South’ allow the High to build a collection of contemporary photography that resonates deeply with our regional audience, and which reinforces our position as the premiere art museum in the southeastern United States.”

“Alec Soth is one of the most talented and original photographers working today. His keen powers of observation and lyrical sensibility are richly evident in this new series, which is both compelling and conceptually relevant,” added Julian Cox, Curator of Photography at the High. “With this commission the High has acquired a significant new body of work that complements our existing holdings of photographs that address the spirit and matter of the Southern landscape.”

Soth’s suite of photographs travels through Southern backwoods, capturing flora, fauna and an unusual cast of characters living outside mainstream society in the Deep South. For this commission Soth traveled extensively throughout the South to photograph landscapes, manmade structures (tree houses, forts, cabins and tents) and people who choose to live on the outskirts of organized society (hermits, monks, campers and survivalists). Soth’s series was inspired by the writings of Flannery O’Connor, the Georgian writer whose Southern Gothic style explored social issues and revealed the cultural character of the American South. Like O’Connor’s stories, Soth’s photographs combine warmth and insight with narrative elements that convey the unique spirit of the region.

Picturing the South
The High instituted the “Picturing the South” initiative in 1996 to serve a dual purpose: not only do the project’s commissions provide a contemporary perspective on Southern subjects and themes, but they also help to build the High’s collection of contemporary photography. The commissions have benefited both the Museum and the artists—Sally Mann’s commission in 1996, for instance, helped support her shift to landscape work and resulted in the first works in her “Motherland” series. The other commissions range from Dawoud Bey’s over-life-size portraits of Atlanta High School students to Emmett Gowin’s aerial photographs of aeration ponds and paper mills. Noted Magnum photographer Alex Webb captured the drama of Atlanta’s street and nightlife, and Richard Misrach used a view camera to reveal the beauty and the pathos of the Mississippi River landscapes between Baton Rouge and New Orleans, an area known as “Cancer Alley.” For its next commission in the series, the High has engaged Kael Alford, a photojournalist and professor at the Savannah College of Art and Design.
Alford’s work will document communities in remote southeastern Louisiana that are threatened by severe coastal erosion.

Alec Soth
Born in 1969, Alec Soth is a photographer currently based in Minneapolis, Minnesota. He is the recipient of several major fellowships from the McKnight, Jerome and Bush Foundations and was awarded the 2003 Santa Fe Prize for Photography. His work is represented in several major public and private collections including the San Francisco Museum of Modern Art, the Museum of Fine Arts, Houston, and the Walker Art Center, Minneapolis. Soth’s photographs have been featured in numerous solo and group exhibitions, including the 2004 Whitney and São Paulo Biennials. His first monograph, “Sleeping by the Mississippi,” was published by Steidl in 2004 to critical acclaim. Soth has published “Niagara” (2006), “Fashion Magazine” (2007), “Dog Days, Bogotá” (2007) and “The Last Days of W” (2008). Soth is represented by Gagosian Gallery in New York and Weinstein Gallery in Minneapolis and is a member of Magnum Photos.

Kaleidoscope Quilts: The Art of Paula Nadelstern Art Institute of Chicago launches its partnership with the art video site ArtBabble.org