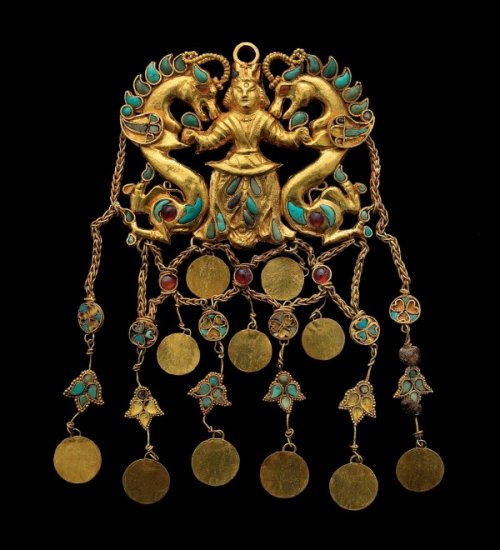 [ad#lb]
Ancient Afghanistan—located at the crossroads of major trade routes, where it attracted invading armies and nomadic migrations—was home to some of the most complex, rich, and original civilizations on the continent of Asia. Opening at The Metropolitan Museum of Art this summer, the traveling exhibition Afghanistan: Hidden Treasures from the National Museum, Kabul, celebrates the country’s unique role, as both the recipient of diverse cultural elements and the creator of distinctive styles of art from the Bronze Age into the Kushan period. The presentation also commemorates the heroic rescue of Afghanistan’s national treasures long thought to have been destroyed. The exhibition features a rich selection of artworks from four archaeological sites. All works belong to the National Museum of Afghanistan in Kabul. Highlights include gold vessels from the Bronze Age Tepe Fullol hoard; superb works and architectural elements from the Hellenistic city of Aï Khanum; sculptural masterpieces in ivory, plaster medallions, bronzes, and Roman glass from Begram; and extraordinary turquoise-encrusted gold jewelry and ornaments from the nomadic tombs at Tillya Tepe.

The exhibition is made possible in part by Raymond and Beverly Sackler and the National Endowment for the Arts.

The exhibition was organized by the National Geographic Society and the National Gallery of Art, Washington, in association with The Metropolitan Museum of Art, New York, the Asian Art Museum of San Francisco, and the Museum of Fine Arts, Houston.
It is supported by a grant from the National Endowment for the Humanities and an indemnity from the Federal Council on the Arts and the Humanities.

In 1978, archaeologists digging at the ancient site of Tillya Tepe in northern Afghanistan made an unprecedented and unexpected discovery: tombs of ancient nomads that had not been disturbed for two thousand years. Buried there were a nomadic chieftain and five women wearing sumptuous adornments such as swords, crowns, and clothing covered with tiny gold appliqués. When the country descended into war shortly after the find, the socalled Bactrian Hoard disappeared and was believed to be lost forever. In 2003, the world was stunned to learn that the priceless artifacts had been located intact in a bank vault within the presidential palace in Kabul. A heroic group of Afghans who have come to be called the “key holders” kept the location of these treasures—along with other masterpieces belonging to the National Museum, Kabul—a secret through 25 tumultuous, war-torn years.

“As we look at these fragile and delicately wrought works of art, we cannot help but be amazed at their survival from antiquity to the present time,” commented Thomas P. Campbell, Director of The Metropolitan Museum of Art. “And as we learn the dramatic story of their fate over the last 25 years, our appreciation for them can only deepen. We are honored to present these beautiful treasures at The Metropolitan Museum of Art—their final US stop on a three-year-long worldwide tour.”

Speaking about the exhibition, His Excellency Said Tayeb Jawad, Ambassador of Afghanistan to the United States, remarked: “Afghanistan has always been the heart of Asia.
Afghanistan’s centrality in the Silk Road created a rich mosaic of cultures and civilizations.
Although this mosaic was shattered by war and terror, both the spirit of the Afghan people and our cultural heritage survived. These priceless artifacts are a testament to the Afghan people and to the heroism of the brave and selfless Afghans who preserved and protected them. This exhibition is a celebration of Afghanistan as much as it is an expression of our appreciation for the global partnership between our ancient nation, the international community, and our friends in the United States.”

Fredrik Hiebert, exhibition curator and National Geographic Archaeology Fellow, continued: “This exhibition is the culmination of many years of work by the Afghans.
Without their courage and commitment, these objects would not exist today. Having worked closely with Afghan officials since 2003 on the preservation and inventory of the objects, I am honored to be part of the effort to share these treasures with audiences in the United States and ultimately to enhance the understanding of Afghanistan’s rich cultural heritage.”

Exhibition Overview
The exhibition is arranged by archaeological site and features new maps and media specially commissioned by the National Geographic Society. The display begins with objects from Tepe Fullol in northern Afghanistan. In 1966, farmers discovered the first evidence of a Bronze Age civilization in the region. The nearby Oxus riverbed may have provided the gold used to create the artifacts found in a burial cache at the site. A highlight is a gold bowl fragment dating around 2000 B.C., depicting bearded bulls, an image familiar in the art of Mesopotamia.

The second section focuses on Aï Khanum, one of the largest Greek-style cities founded in a region of Asia that had been conquered by Alexander the Great. Several buildings—a theater and gymnasium built in the Greek style—bear witness to the city’s Greek origins, as do scientific instruments such as sundials. Works from the site show the Mediterranean influence in the area between the fourth and second centuries B.C. Sculptures and other objects from this site include a stone portrait of the Gymnasium director, a bronze image of Herakles, and a gilded silver plaque with the goddess Cybele, exhibiting a mixture of Greek and Near Eastern imagery.

The excavations at Begram, the third site, yielded works dating from between the first and second centuries A.D. Among the contents of two sealed rooms were remarkable luxury goods, including more than 180 Roman glass vessels and spectacular ivories carved in an Indian style, which are among the earliest preserved works of their kind. They depict women and children in domestic settings, as well as Indianized motifs such as the makara, a crocodile-like creature. These works shed light on the role of Afghanistan in the exchanges
between East and West along the legendary Silk Road.

The fourth section of the exhibition focuses on Tillya Tepe and includes impressive inlaid gold objects found in the six nomadic tombs that were unearthed there. The individuals buried in the tombs belonged to the same group of nomadic peoples who first overran Bactria around 145 B.C. and brought an end to the Graeco-Bactrian kingdoms that had flourished in the region. The tombs of a chieftain and five women contained different kinds and quantities of objects, which may reflect their relative status. Dating from the first century A.D., the works include an exquisite crown and other luxury objects, most made of solid gold and many encrusted with turquoise and garnets. Although it is not known where the gold originated, the turquoise is probably from northeastern Iran and the other semiprecious stones may have been obtained from more distant regions through trade. The adornments found at the site display a fascinating blend of nomadic, Greek, Indian, and Chinese imagery. In addition, the closest parallels for the typically nomadic gold crown worn by the one of the women are found much later in fifth and sixth century A.D. tombs of the Silla Kingdom in Korea. Tillya Tepe thus raises compelling questions about the geographic and temporal span of nomadic traditions in Asia.

Also included in the exhibition is a 13-minute film, narrated by Afghan American author, Khaled Hosseini, and produced by National Geographic, which tells of the original discovery and excavation of these collections and their dramatic rediscovery in 2003.

The exhibition was developed by Fredrik T. Hiebert, National Geographic Society Archaeology Fellow, Washington, D.C. The presentation at the Metropolitan Museum is overseen by Joan Aruz, Curator in Charge, and Elisabetta Valtz Fino, Curator, both in the Department of Ancient Near Eastern Art, and Denise Patry Leidy, Curator, Department of Asian Art.

The exhibition is accompanied by an illustrated catalogue, Afghanistan: Hidden Treasures from the National Museum Kabul, published by National Geographic Books. Edited by Fredrik Hiebert and Pierre Cambon, the publication will be available in the Museum’s book shop ($30 paperback).

An audio tour, part of the Museum’s Audio Guide Program, will be available for rental ($7, $6 for members, $5 for children under 12).

Gotthard Schuh – A Kind of Infatuation Trends and Techniques: A Short History of Printmaking