The Heights of Fashion: Platform Shoes Then and Now

Platform shoes are back this spring, but don’t expect to see them on the runway. Opening April 25 at the Mint Museum of Art, The Heights of Fashion: Platform Shoes Then and Now showcases more than 60 platform shoes from the 1930s through the present – a true shoe lover’s delight! 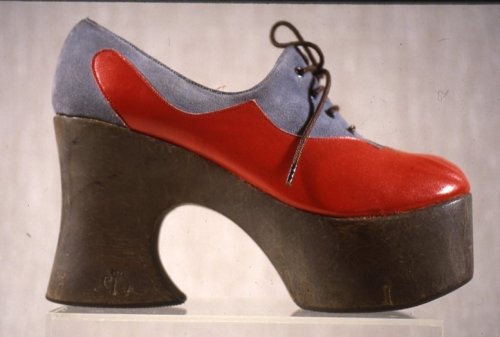 [ad#lb]
With origins dating back to ancient Greece, platform shoes first appeared in Europe and the United States during the 1930s and 1940s. The popularity of platforms reached its greatest height in the 1970s, when these shoes became associated with a rebellious youth movement that decried societal standards of older generations. From the free-spirited fashions of the 1970s to the trendy footwear of today, platforms have continued their role as fashion statements worn by both sexes.
The Heights of Fashion spans more than 100 years of platform shoes. Ranging from the delicate “lotus bud shoes” of 19th century China designed to emphasize women’s tiny bound feet to the chunky Goth platforms of the 1980s, the shoes on exhibit demonstrate how extreme variations on a style developed in response to different cultural philosophies and concepts of beauty.
The exhibition includes high fashion platform shoes by couture designers that move—sometimes with caution to the wearer—from the fashion runway to the streets. Footwear by Vivienne Westwood, Jimmy Choo and Roger Vivier reveal influential and innovative designs that incorporate modern engineering with vintage inspiration. Household brands such as Candie’s showcase the platform’s traditional thick sole and chunky heel, while unconventional materials such as titanium, chrome and carbon fiber offer an entirely new look in the sleek, yet feminine, designs of emerging designer Ruthie Davis. The platform’s first wedge heel appears in shoes designed by Salvatore Ferragamo, who is credited with transforming platform shoes from casual beachwear to high fashion in the 1930s.
The Heights of Fashion will be on display at the Mint Museum of Art through spring 2011.