Among Largest Loans of Terracotta Works Ever to Travel to US; Presented in Association with the British Museum
The First Emperor: China’s Terracotta Army
November 16, 2008–April 19, 2009 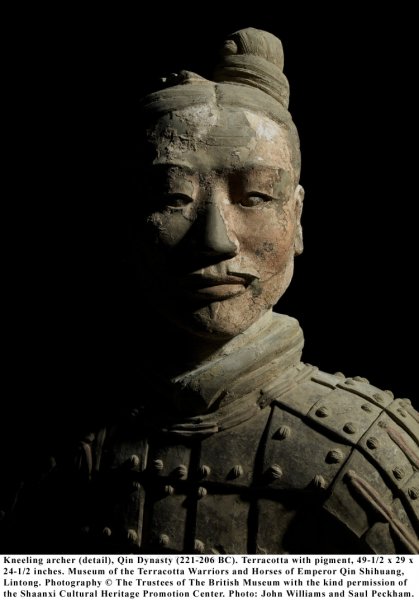 [ad#lb]
The High Museum of Art presents “The First Emperor: China’s Terracotta Army,” an exhibition inspired by one of the greatest archaeological discoveries of the 20th century. Featuring 100 works, including 15 terracotta figures, the exhibition represents one of the largest groups of important works relating to the First Emperor ever to be loaned to the U.S. by the Museum of the Terracotta Army and the Cultural Relics Bureau of Shaanxi Province in Xi’an, China. With rarely seen and recently discovered objects from his famed tomb complex, the exhibition provides insight into the legacy of China’s First Emperor, Qin Shihuangdi, who reigned from 221–210 B.C. “The First Emperor” will be on view at the High Museum of Art from November 16, 2008, to April 19, 2009.

“This is a fascinating look into the history of one of the world’s oldest and richest cultures, as well as one of the world’s greatest discoveries—the First Emperor’s terracotta army,” said Michael E. Shapiro, the High’s Nancy and Holcombe T. Green, Jr. Director. “We are proud to continue our tradition of partnering with museums across the globe to bring the world’s greatest art to Atlanta. Our visitors will have the opportunity to see these warriors up close and appreciate their magnificence within the context of their creation, as well as in the history of China.”

The famed terracotta army was initially discovered in 1974. In recent years, ongoing excavations have revealed that the army stood guard over a vast underground palace of far greater complexity than was previously assumed. Exhibition highlights include one of the largest group of life-sized terracotta figures to be exhibited in the United States, presenting both iconic and recently discovered examples:

These life-sized terracotta figures populated the underground tomb complex just as they would have been integral to the activities of the First Emperor’s actual court. With so many figures on view, visitors will be able to see how each assumes a distinct role. For the soldiers, differences in armor detailing and hair style denote military rank. Some stand while others kneel, frozen in the poses of infantrymen, generals, and archers in action. For the civilian figures, identities are revealed by stature, costume, and stance: the heavy belly of the strongman, the lithe pose of the acrobat, and the small frame of the robed stable boy disclose a carefully orchestrated court life in which each person served a distinct purpose. Further, all figures are individualized with a distinctive facial appearance. Close to 1,000 figures have been excavated from the tomb, and it is estimated that a total of 7,000 may ultimately be unearthed. No two terracotta figures are identical, testifying to a remarkable feat of organized production.

“The First Emperor” will present the objects within their historical and archaeological contexts and will discuss recent research and excavation. In doing so, the exhibition also presents a reassessment of the First Emperor himself, a crucial figure in Chinese history. It was through his military conquest that what we now know as China was unified in 221 B.C. Equally important to the empire were his governmental and cultural achievements, which include the establishment of a centralized bureaucracy, a unified law code, standardized coinage and script, and the building of the Great Wall. The objects on view in “The First Emperor” are at once a representation of the military and civilian worlds he created, and a demonstration of his desire to exert equal control over his afterlife.

Beyond figural sculptures, the exhibition also includes artifacts such as:

• Bronze weapons, including arrowheads, lances, swords and knives
• Stone armor
• Coins and coin molds
• Weights and measures inscribed with the emperor’s decree for standardization.
• A restraining iron indicating the use of forced labor in the construction of the tomb complex.

Historical Background
Qin Shihuangdi began his career as the King of Qin (pronounced ‘chin’), one of the era’s “Warring States,” He was one of the greatest military leaders of all time, building on his state’s martial prowess and his organizational and strategic skills to conquer rival territory and establish the Qin Empire in 221 B.C. It is believed that the western name for China is most likely derived from the word Qin, which became the name of the entire country during his rule.

Preparations for the construction of the First Emperor’s tomb began early, shortly after he became King of Qin, and were left uncompleted when he died. Though the tomb mound was visible aboveground, no written record of the terracotta figures survived. They were rediscovered only when a small group of farmers began digging a well at the site in 1974. In 1999 eleven terracotta acrobats and strongmen were found near the tomb mound, designed to entertain the Emperor in his afterlife. Terracotta civil officials and scribes were found in October 2000, and a year later a grouping of bronze birds was discovered, featuring life-size bronze geese, swans and cranes.

The new finds have contributed to a deeper understanding of the First Emperor and his many achievements.
Civilian and cultural achievements followed his military success, including the establishment of a unified law code, coinage, script and system of weights and measures. The First Emperor also developed a centralized bureaucracy to administer the new state. He traveled around the country he had conquered, setting up inscriptions on commemorative pillars to proclaim his achievements, building gigantic palaces and initiating architectural projects on a grand scale. After surviving a series of assassination attempts, he became obsessed with achieving immortality and tried many different potions made for him by alchemists at court. These may have included phosphorous and balls of mercury, which he thought would secure eternal life. They failed, and the First Emperor died suddenly in 210 B.C.

The First Emperor has been seen in both positive and negative lights throughout history, and his legacy is still the subject of much debate. The archaeological evidence from his tomb is essential to understanding the Emperor’s life, given the limited historical resources.

The exhibition is accompanied by a catalogue published by the British Museum Press in London and Harvard University Press in the United States. “The First Emperor: China’s Terracotta Army” is edited by Jane Portal, the Matsutaro Shoriki Chair of the Department of Asia, Oceana, and Africa at the Museum of Fine Arts Boston and curator of “The First Emperor.”

“The First Emperor” was on view at the British Museum in London from September 13, 2007, to April 6, 2008. The objects featured in the exhibition will also traveled to the Bowers Museum of Cultural Art in Santa Ana, Calif., the Houston Museum of Natural Science in Texas, and the National Geographic Society Museum in Washington, D.C., where they will be presented within a different curatorial framework.

SCANZ 2009 The Mystery of George Masa