Surrealism and the Dream 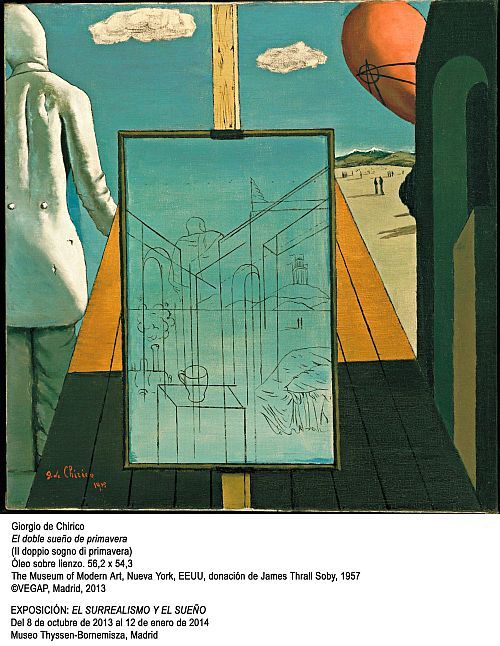 Opening on 8 October, the Museo Thyssen-Bornemisza is presenting the first monographic exhibition on Surrealism and the dream. Including a total of 163 works by the great Surrealist masters –André Breton, Salvador Dalí, Paul Delvaux, Yves Tanguy, Joan Miró, René Magritte, Max Ernst, André Masson, Jean Arp and Man Ray– the exhibition will offer a thematic presentation of the Surrealists’ visual interpretation of the world of dreams. The works in the exhibition are loaned from museums, galleries and private collections around the world including the Centre Pompidou (Paris), Tate Modern (London), the Museum of Modern Art and the Metropolitan Museum of Art (New York), among many others.
Surrealism should not be considered just one more art movement: rather, it was an attitude to life essentially based on a vision of interior images accessed through the flow of desire. Its ideas have had a key influence on all subsequent art and on the contemporary mindset. The present exhibition aims to demonstrate that this influence has its most profound roots in the Surrealist connection between dream and image.
In order to do so, the exhibition will include examples from the wide range of media in which this link is evident: painting, drawing, graphic work, collage, objects, sculptures, photography and film. The Surrealists’ creative horizon encompassed all art forms that could enrich and expand the mind, and its doors were equally open to painters, sculptors, photographers and filmmakers who were the first to adopt the fusion of expressive genres with a multimedia aesthetic during a period of major technological advances in the production and reproduction of images.
From this viewpoint, the role played by film was crucial. The darkness of the cinema brought about an encounter with the unexpected and the amazing of an unpremeditated and unconscious kind. Looking at the silver screen was the realm of waking dreams. According to André Breton, it was in cinemas that “the only totally modern mystery was celebrated”.
In the present exhibition the cinema is represented by seven video installations that will project excerpts from selected Surrealist films including Un chien d’Andalou (1929) by Louis Buñuel and Salvador Dalí, in which the idea of alienation or rootlessness – a key concept in the Surrealist aesthetic – is taken to its furthest limit. The film discards any narrative ordering in order to unfold a flow of images that is as open as a dream.
The significant presence of female artists in the exhibition is another important feature. For the first time, women artists encountered a key role within the context of Surrealism and one that gradually extended beyond their initial function as muses, objects of desire or companions.
Many of them developed a creative personality that challenged or differed from those of their male colleagues. The large number (eleven) of women artists represented in the present exhibition, including Claude Cahun, Kay Sage, Nadja, Toyen, Dora Maar, Leonor Fini, Remedios Varo, Dorothea Tanning, Ángeles Santos, Meret Oppenheim and Leonora Carrington, offers proof of the unique nature of their contribution to the Surrealist representation of dreams.