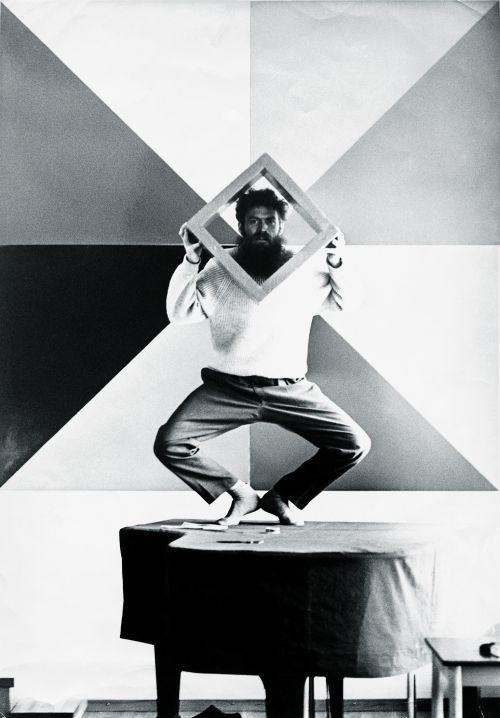 The painter, sculptor and filmmaker Poul Gernes (1925-1996) is considered a modern classic and numbers among the most influential of Scandinavian artists. He constantly sought to link art to life by means of colour and design. In the 50 years Poul Gernes was active he had numerous exhibitions and he shaped the face of more than 150 buildings in Denmark. He left behind an impressive ›uvre, which is fascinating on account of its extraordinary complexity.

Malmö Konsthall and Lunds konsthall are staging a dual exhibition that provide a comprehensive insight into his art. The exhibition sheds clear light on the important stages in Gernes’ development – from virtually unknown studies from the 1940s meticulously drawn in the style of the Old Masters through to the large-format stylized floral and linear forms that featured in his late flower paintings of the 1990s.

In 1961, Poul Gernes joined forces with art historian Troels Andersen to establish the Experimental Art School in Copenhagen, which was known as Eks-skolen for short, and quickly became an indispensable part of the Danish art scene. Characteristic of his work are the picture series from the 1960s and 1970s that can be located somewhere between Minimalism and a Pop Art feel. In them, simple circles, letters, plain patterns or targets are varied. In addition to producing paintings and sculptures, from 1977 onwards Gernes concentrated on the painting and interior decoration of public buildings.

Occasionally, Gernes pointed out that most of his larger works were only ever exhibited once, namely at the location for which they were intended. For the first time this exhibition provides his extensive and intensively coloured painterly abstractions in a setting commensurate with their spatial dimensions. In this way, the monumental scale of Gernes’ pieces that oscillates between abstraction and ornamental design becomes appropriately tangible as an objective of his art.

Gernes constantly questioned what art was, and undermined customary concepts of art, whether in the use of materials, the inclusion of everyday actions in his works or in his reflecting on industrial production processes and becoming actively involved in them as a designer. He used extremes to provoke. For instance in his film Vomit (1963), in which he employed his own body for a soiling action. In 1969, at the Festival 200 exhibition in the Copenhagen Charlottenborg Art Gallery Gernes installed a public baths and invited the public to shower in an institutional setting.

Alongside these rebellious aspects, his enthusiasm for craftsmanship and his intuitive knowledge of the right touch were essential elements of his artistic work. He earned his money as a drawing instructor in evening classes for women, became a teacher and idol for the young Copenhagen avant-garde scene, before finally in the 1980s teaching as a professor at the Royal Danish Art Academy in the Institute for Mural and Spatial Art. Gernes wanted his art to appeal to people. “Aesthetic ego-trips” as he called them, were not his thing.

Poul Gernes was familiar with the various historical forms of the avant-garde. He moved between the genres and traditions, observed Pop Art with the eyes of Vincent van Gogh, or mixed Minimal Art with aspects of the decorativism of the Viennese Secessionists. This might go to explain the unorthodox, but also the highly individual beauty of his work, which connects space and the two-dimensional with human narrations and various styles. Poul Gernes attracts great interest from young artists – hardly surprising as a broadbased use of media and stylistic breaks are part and parcel of contemporary art.