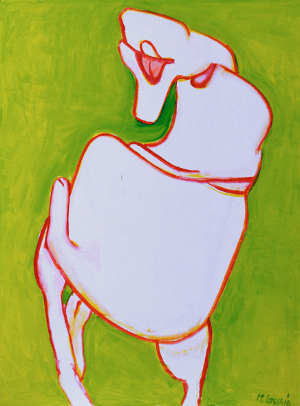 I certainly do not paint or draw the body as an “object” – but I paint sensations of the body.
Maria Lassnig, 1999

For more than six decades, in her paintings and drawings Maria Lassnig has explored perceptions and representations of the inner sensations of the body. Lassnig, who was born in 1919 in Carinthia, Austria, already gave her early 1940s work the programmatic title of “bodyconsciousness drawings”. Soon thereafter she visited Paris and came into contact with surrealism and art informel. Though her non-figurative geometrical work she quickly became the most important protagonist in abstract art in post-war Austria, but even in her abstract works she still focused on subjective sensations and emotions. In the late 1960s Lassnig moved to New York. In the USA her style became more realistic. She continued to paint, and also made several animated films, a genre she returned to many times. In her last animated film, Cantate, made in 1992, she filmed her own life story as a video clip. In 1980 Maria Lassnig returned to Vienna to take up a professorship at the University of Applied Arts, and in the same year Lassnig and Valie Export together represented Austria at the Venice Biennale. In 1982 and 1997 Lassnig took part in documenta. Her work has been presented and recognised by many international institutions in recent years. Last September Lassnig celebrated her ninetieth birthday.
The exhibition in the Lenbachhaus has been co-designed by the artist and provides an overview of her work of the last decade. The show presents over forty paintings, some in large format, and a number of pieces that have not been presented to the public before. The exhibition will also show all of Lassnig’s films since the 1970s.