Living Small and I Stare at People

The Art Museum of Southeast Texas (AMSET) presents Living Small and I Stare at People by Lavanna Martin
Café Arts
Aug. 6 through Nov. 1, 2009 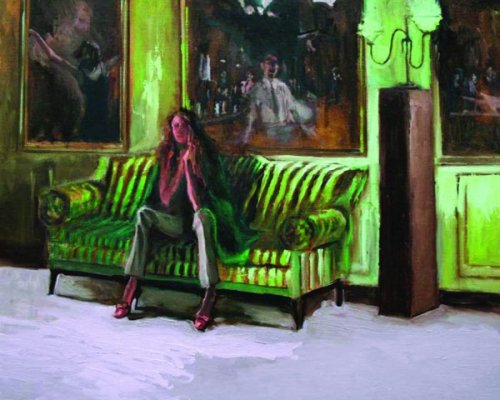 Martin’s loose painting style and café/interior subject matter is reminiscent of French paintings of the late 19th century, which frequently render leisurely café scenes and interior settings. Martin terms the coffeehouse paintings “live” as she executes them on the spot at various coffeehouses in Austin. Her decision to paint figures “live” originated from an increasing sense of frustration in creating art in a controlled studio, which the artist believed inhibits her artistic spontaneity. “Working in this fashion is difficult, and I have a huge failure rate,” Martin has said. “It is not for the faint of heart – you have to be kind of crazy.”

Born in the small west Texas town of Seminole with an oil field working father, Martin and her family moved 26 times before she was five years old. She attributes her source of inspiration for interior spaces to her early, formative years. “I remember developing a keen sense of drawing interiors at the age of ten,” she said. “I spent hours copying pictures from home and garden magazines. Being from an oil field family that moved around a lot, I was probably longing to stay put, and in some place nice.”

Martin said she has always loved to paint and is, in fact, obsessed with painting. She is enamored with the smell of the oils and their descriptively distinct names, such as Alizarin Crimson, Indian Yellow and Persian Red.

Martin earned a bachelor of fine arts degree from Trinity University in 1975 and studied at Cranbrook Art Academy in Bloomfield Hills, Mich. in 1980. She also previously served as the assistant art director for Dallas-Fort Worth Home and Garden Magazine.

Living Small and I Stare at People are part of AMSET’s continued mission to feature local artists in Café Arts. The exhibition is open for viewing during regular museum hours. Two Magnolia’s serves lunch in Café Arts from 11 a.m. to 2 p.m., Monday through Friday.