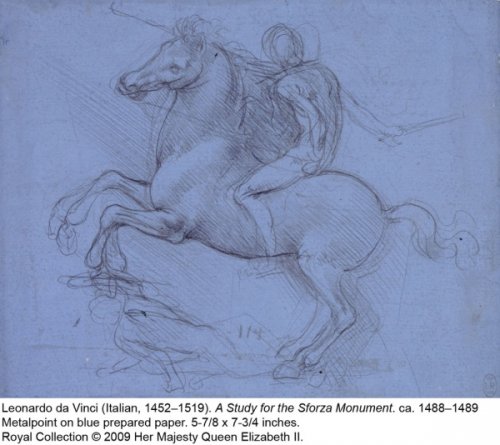 [ad#lb]
The first exhibition to explore Leonardo da Vinci’s profound interest in and influence on sculpture will premiere at the High Museum of Art in October 2009. “Leonardo da Vinci: Hand of the Genius” will feature approximately 50 works, including more than 20 sketches and studies by Leonardo, some of which will be on view in the United States for the first time. The exhibition will also feature work by Donatello, Rubens, Verrocchio, and Rustici—including Rustici’s three monumental bronzes from the façade of the Baptistery in Florence that comprise “John the Baptist Preaching to a Levite and a Pharisee,” which was recently restored and has never left Florence. Also included are works from world-renowned collections, including those of Her Majesty Queen Elizabeth II, the Vatican Museums, the Musée du Louvre, the British Museum, and the Museo Nazionale del Bargello in Florence.

The exhibition will shed new light on Leonardo’s seminal role in the development of Renaissance sculpture and the work of artists who followed him through an examination of the sculpture that Leonardo studied, the sketches and studies he created for his own sculptural projects (the majority of which were never realized), and his interactions with other Renaissance sculptors. Organized by the High Museum of Art, “Leonardo da Vinci: Hand of the Genius” will premiere in Atlanta October 6, 2009, through February 21, 2010. A modified version of the exhibition will travel to the J. Paul Getty Museum in Los Angeles (March 23 through June 20, 2010).

“Though Leonardo was only able to create a small number of sculptures and few of them survive, this exhibition will reveal the enormous impact that Leonardo had on the field of sculpture, and how his study of ancient and Renaissance sculpture influenced future generations,” said Michael E. Shapiro, Nancy and Holcombe T. Green, Jr. Director of the High Museum of Art. “Following in the tradition of “Verrocchio’s David” and “Ghiberti’s Gates of Paradise,” this exhibition underscores the High’s commitment to collaborative partnerships that promote new research, advance scholarship, support conservation and bring great works of art to Atlanta and other major U.S. cities.”

Leonardo, Sculptor
The initial section of the exhibition, “Leonardo, Master Sculptor,” will feature drawings associated with Leonardo’s plans for works of sculpture, including an in-depth examination of Leonardo’s plans to create the world’s largest and most technically complex statue, a work which was to depict Duke Francesco Sforza mounted on horseback. By November of 1493, Leonardo had completed a 24-foot tall clay model of the horse alone. When war interrupted his work the planned bronze casting was halted and the clay model was subsequently destroyed. A 24-foot-high recreation of the Sforza horse, manufactured by the Opera Laboratori Fiorentini S.p.A., will be on display on the Sifly Piazza at the High.
In addition to the Sforza monument, the exhibition will examine two of Leonardo’s other equestrian projects for Gian Giacomo Trivulzio and King Francis I of France through the artist’s compositional and anatomical studies as well as drawings for proportioning, modeling, and casting. Many of these detailed horse drawings are being loaned from the collection of Her Majesty Queen Elizabeth II.

Leonardo, Student of Sculpture
The exhibition will also look at Leonardo’s wide ranging interest in sculpture, including an examination of those sculptors whose influence can be seen in his work. “Leonardo, Student of Sculpture” will pair Leonardo’s drawings with the works of ancient and early Renaissance sculpture that inspired him, illustrating the process of his three-dimensional drawings. A life-sized bearded prophet executed in marble by Donatello from the Florence Campanile (ca. 1418–1420), the model for the standing figure in Leonardo’s unfinished “Adoration of the Magi,” has never been seen outside of Florence, Italy, and is being restored in preparation for this exhibition.
To demonstrate the influence of earlier generations of sculptors on Leonardo, the exhibition will look specifically at the relationship between Leonardo and his master Andrea del Verrocchio. Through an examination of two terra cotta angels from the collection of the Musée du Louvre, one usually attributed to Verrocchio (ca. 1480), the other to Leonardo (ca. 1480), visitors will be able to see the influences of teacher on student yet also detect where their styles diverged. The High will also unveil two works newly attributed to Leonardo da Vinci. The recent cleaning of Andrea del Verrocchio’s “Beheading of the Baptist” (1477–1483) relief for the Silver Altar of the Florentine Baptistery has enabled a detailed examination of its individual components, revealing that two of the figures were made very differently than the others. Gary Radke, guest curator of the exhibition and Dean’s Professor of the Humanities at Syracuse University, recently proposed that the two figures, each of which is no more than eight inches high, were created by Leonardo da Vinci and
not Verrocchio, who was his teacher.

Leonardo, Model and Mentor
The exhibition will conclude with a look at Leonardo’s influence on a younger generation of sculptors. “Leonardo, Model and Mentor” will examine works that Peter Paul Rubens and Giovanni Francesco Rustici created in response to Leonardo’s monumental “Battle of Anghiari” fresco in the Palazzo Vecchio, which has since been painted over. Two terracotta battle groups by Rustici, Leonardo’s most faithful student of sculpture, will be presented alongside Peter Paul Rubens’ masterful copy of Leonardo’s original fresco. Additional small bronze horses and warriors inspired both by the “Battle of Anghiari” and Leonardo’s equestrian projects will demonstrate the range and depth of Leonardo’s influence.
The final section of the exhibition will also feature Giovanni Francesco Rustici’s three larger-than-life-sized bronze figures that comprise “John the Baptist Preaching to a Levite and a Pharisee,” which has been recently restored and will be shown outside of Florence for the first time. Leonardo has long been credited with greatly influencing the work, as much of the group was modeled between March and September 1508 while Leonardo and Rustici were sharing living quarters. Artist and biographer Giorgio Vasari acknowledged Leonardo’s involvement in the project: “[Leonardo] proved himself in sculpture with the three bronze figures over the north door of San Giovanni which were executed by Giovanni Francesco Rustici but finished with Leonardo’s advice; they are the most beautiful casts both for their design and for their perfection that have yet been seen in the modern age.”

Leonardo da Vinci
Leonardo da Vinci (1452–1519) is widely recognized as a scientist, inventor, philosopher, writer, designer, sculptor, architect, and painter. His artistic apprenticeship took place in Florence in the workshop of painter and sculptor Andrea del Verrocchio. In 1482, he left Florence for the court of Ludovico Sforza, Duke of Milan, where he was to spend much of his career. During his early Milanese period he painted his iconic Last Supper.
He fled Milan after the French invasion of the city in 1499 and returned to Florence, where he painted the Mona Lisa, and continued his technological, geographical, and scientific studies. He returned to Milan in 1506, and after spending some time at the Papal Court in Rome, accepted an invitation from Francis I, King of France, to work at his court, where he remained until his death.