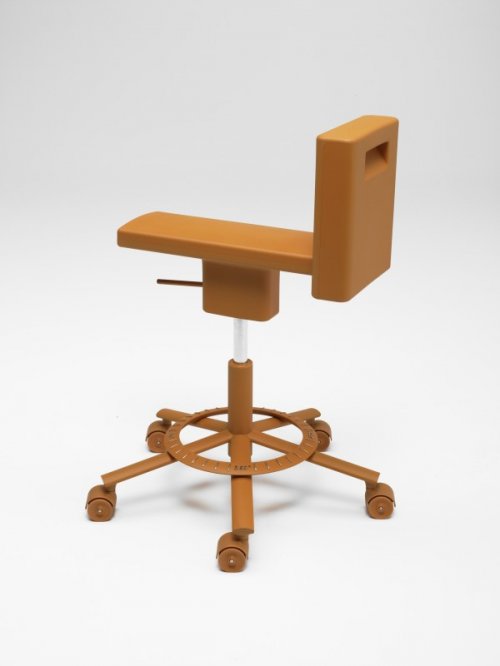 [ad#lb]
The Art Institute of Chicago will display the furniture and product designs of Konstantin Grcic in the first major exhibition of his work in a U.S. museum. Konstantin Grcic: Decisive Design, on view in the Abbott Galleries of the Modern Wing from November 18, 2009 through January 24, 2010 , is specifically devoted to the portfolio of Grcic and his firm, Konstantin Grcic Insdustrial Design (KGID), and brings together more than 100 of his objects, including furniture, products, tableware, and office accessories. Grcic is known for his logical designs, driven by an honesty of materials and an appropriateness of production methods. His diverse output re-examines how an object should look, function, and what its inherent relationship to the user should be. The works featured at the Art Institute, while spanning his career, are united by his foundational principles of simplicity, irony, and subtle humor.

“The Art Institute opened the Modern Wing with a renewed commitment to showcase the work of designers who are at the forefront of progressive thinking and practice in the field of design,” said Zoë Ryan, Neville Bryan Curator of Design at the Art Institute and curator of the exhibition. “In this regard, there is no better inaugural design exhibition than the work of Konstantin Grcic. Equally attentive to form and function, Grcic’s inventive projects offer insightful and intelligent commentaries on the history and nature of design itself and the ways in which we interact with everyday objects.”
Grcic was born in Munich, Germany. He initially trained as a carpenter and cabinetmaker at Parnham College in Britain. He went on to receive a master’s degree in Industrial Design from the Royal College of Art in London. While working for designer Jasper Morrison, Grcic began to shape his own aesthetic, rooted in minimalism but leavened with humor and whimsy. In 1991, he founded his own studio, KGID. KGID works for some of the leading brands of the international design industry–including ClassiCon, Luminaire, Magis, Moroso, Muji, Plank, Rosenthal, and Vitra–and specializes in various fields of design, ranging from furniture and industrial products to window displays and objects closely related to architecture.

Grcic is known for reinventing the forms of familiar industrial and interior objects–desks, chairs, benches, stools, kitchen equipment, lamps, or a set of salad servers–in an effort to reawaken our interests in our quotidian activities. He does so by an almost uncanny ability to redefine the personality of a product by closely examining its relationship with its user and by scrutinizing its materials. In the process, Grcic creates innovative new archetypes of everyday objects that actually suggest or require new modes of behaviors, such as his Chaos Chair that is designed to let the user, rather than the chair, determine his or her posture. His work is included in the permanent collection of the Art Institute, as well as the Museum of Modern Art in New York, the Centre Georges Pompidou in Paris, and the Neue Sammlung in Munich.

The exhibition includes objects that are readily available to consumers as well as experiments that push the constraints of industrial production. Highlights of Decisive Design include the Myto chair, designed for Plank, a cantilevered chair named after the Mito sports motorbike made by Cagiva, whose low-slung thrust was made possible by using an advanced plastic polymer; the 360° chair designed for Magis, whose quirky form rethinks conventional office chairs; and the Mayday lamp, perhaps Grcic’s best known work, produced for Flos, which reinterprets the industrial lamps used in auto mechanic shops for a domestic setting. The Mayday lamp won the prestigious Compasso d’Oro award at the Milan furniture fair in 2001 and the Myto chair won a Brit Insurance Design Award for Furniture from the Design Museum in London in 2009. Reflecting Grcic’s adherence to industrial production, the Mayday lamp is widely accessible and is available in the Art Institute’s Modern Shop.

An engaging exhibition design created by Konstantin Grcic in collaboration with curator Zoë Ryan will enable visitors to explore the breadth of his output in a studio-like environment with a multi-layered presentation of projects, imagery, sketches, drawings, and background information that will help illuminate the complex process of industrial design. In addition, visitors will be encouraged to enter a central zone outfitted like a mini racetrack, a design that reflects Grcic’s long-standing interest in Formula 1 racing and the inspiration behind much of his work, in which they can try out some of his award-winning designs for themselves.

Konstantin Grcic: Decisive Design is accompanied by a fully-illustrated catalogue. This is the first publication to look specifically at Grcic’s work over the past five years, a period when he has harnessed an increased interest in new technologies and materials that allow him to produce furniture and product designs that are transforming the landscape of contemporary design.

Konstantin Grcic: Decisive Design is organized by the Art Institute of Chicago and curated by Zoë Ryan, Neville Bryan Curator of Design in the Department of Architecture and Design. Support for this exhibition is provided by the Architecture & Design Society, the Fellows and Benefactors of the Architecture and Design Department, Celia and David Hilliard Fund, the Graham Foundation for Advanced Studies in the Fine Arts, and Luminaire. In-kind support was provided by Bridgestone Americas.