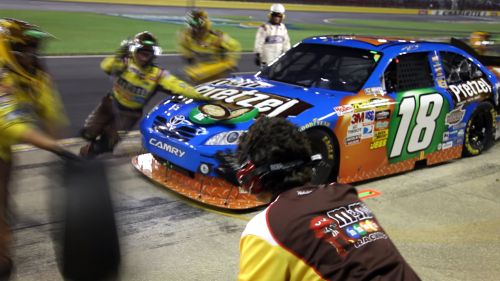 Speed, precision, and danger are key elements of the exhibition VantagePoint IX – Janet Biggs: Going to Extremes, on view 5 November 2010 – 29 May 2011 at the Mint Museum Uptown. From a kayaker navigating threatening Arctic waters to a NASCAR pit crew racing against the clock, Biggs’ video subjects tend to lead her to extremes.

Janet Biggs has been creating and exhibiting videos and video installations for nearly 20 years. Examining themes of speed, precision, personal discipline, gender roles, spectatorship, and calculated risk, her videos capture the athleticism of performance juxtaposed with danger. A common thread within her subjects is their willingness to undertake extraordinary risks—even brushes with death—in pursuit of the sublime.

Biggs’ latest work, Duet, brings her into new territory. Focusing on the world of NASCAR, the artist partnered with Joe Gibbs Racing to shoot footage showing how auto racing’s wild popularity and position within consumer culture create both drama and heroism. Rather than focusing exclusively on the drivers, Biggs presents the speed, precision, and agility of the pit crews and reveals their extreme grace under pressure. Juxtaposing the pit crew footage with scenes of the cars racing around the track, the video examines the relationships between power and precision, and chaos and control, which are central to the search for speed. Biggs also integrates sound and video footage of a violinist and vocalist performing The Flower Duet from the opera Lakmé by Léo Delibes. Duet will be screened for the first time as part of the exhibition. Commissioned from the artist, the video will remain in The Mint Museum’s permanent collection.

Fade to White follows the journey of Audun Tholfsen, a guide and crew member on the Nooderlicht, a schooner that took Biggs to the Arctic in 2009. The video reveals the myth of the solitary male explorer by focusing on Tholfsen’s trials as he navigates the ship, and sometimes a kayak, through threatening, iceberg-filled seas. Loss and change are implicit in the video’s title, which refers to an editing technique used to evoke death or transcendence. Biggs integrates the striking Arctic imagery with sound and video footage of countertenor John Kelly, whose age, androgyny, and mournful voice parallel the vanishing Arctic landscape and signal the waning of male dominance.

With its title taken from Richard Sarafian’s 1971 road movie, the video Vanishing Point looks at the ways in which an individual can vanish. Combining images of motorcycle speed record holder Leslie Porterfield on Utah’s Bonneville Salt Flats with footage of Harlem’s Addicts Rehabilitation Center Gospel Choir performing a song written specifically for the video, Vanishing Point examines the struggle to maintain one’s identity, the role of those who witness that identity vanishing, and a search for freedom that can end in either destruction or transcendence.

Airs Above the Ground examines the performance of youth, equating age with pageantry and masquerade. An ethereal image of an inverted, weightless synchronized swimmer suspended in slow motion reveals the strenuous effort and dedication behind the appearance of youthful ease. The hyper-stylized gestures and affected costume of the athlete belie the power, agility, and strength required to make every action appear graceful. Biggs suggests that youth is bound by social constraints that set some individuals on a search for impossible perfection or transcendence.

Biggs will give a lecture discussing the inspiration behind her work on Thursday, 4 November at 7:00 p.m. at the Mint Museum Uptown. The lecture is free and open to the public.