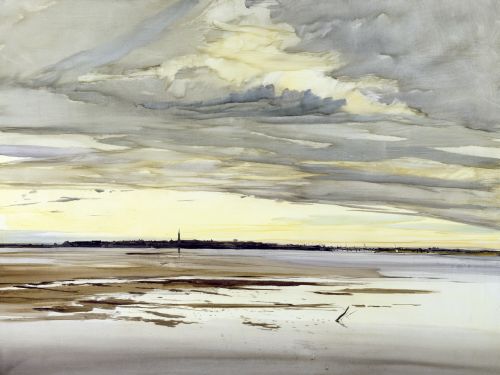 An exhibition marking the 80th birthday of James Morrison, one of Scotland’s finest landscape artists, is to be held at The Fleming Collection at 13 Berkeley Street, London W1 from 19 February to 6 April 2013. The retrospective, entitled Land and Landscape: The Painting of James Morrison, will range from 1950s pictures of his home city Glasgow to more recent landscapes inspired by rural and coastal Scotland and trips overseas. Alongside the Morrison exhibition will be a smaller show of etchings by the influential late 18th century Scottish landscape artist John Clerk of Eldin. This will commemorate the 200th anniversary of Clerk’s death and the two exhibitions at The Fleming Collection, which has become an embassy for Scottish art in London, will complement one another, looking at very different aspects of Scottish landscape art.

Morrison’s works have been bought by the Royal Family and by J.K. Rowling, author of the Harry Potter novels, as well by museums and corporate and private collections around the world. He was born in Glasgow and studied at Glasgow School of Art in the early 1950s. During and just after his student years he produced bleak, almost monochromatic, paintings of Glasgow’s grim streets and rotting tenements, some of which, such as Rottenrow: The Midgies and Crown Terrace, will be in The Fleming Collection exhibition.

In the late 1950s, increasingly uncomfortable with city life, Morrison’s focus moved to north-eastern Scotland where over a decade or more of experimentation and analysis he tackled the very different set of formal problems posed by landscape painting. His son Dr John Morrison, Head of the School of Divinity, History and Philosophy at the University of Aberdeen, writes in Scottish Art News, published by The Fleming Collection: “What emerged were not realist recordings of outward appearance but explorations of the tenets of landscape.” One of the paintings in the exhibition from this period is St Cyrus Abstract, loosely based on the landscape of a salt marsh behind coastal dunes and influenced by a combination of 1960s Op Art and Morrison’s long term interest in physics and geometry. However by the mid-1970s Morrison’s work had, his son writes, “undergone an elemental turn towards realism” and in recent decades he has produced stunningly beautiful landscapes of Scotland such as Old Montrose Winter (1984), Montreathmont Forest (1990), and Summer Isles, Pat Macleod’s View (2002), all included in the retrospective at The Fleming Collection. Morrison’s principal inspiration comes from the lush farmland around his home in Angus in north east Scotland and the rugged wildness of Assynt on the coast of Sutherland. But Morrison, a member of both the Royal Scottish Academy and of the Royal Scottish Society of Painters in Watercolour, has also travelled widely, painting in Greece, France, the Canadian High Arctic and Botswana during his long artistic career.

“All these works are anchored in 50 years of looking at and thinking about the landscape, the weather, the geology and the space,” writes Dr Morrison, whose book on his father will be published to coincide with the exhibition. “These paintings, as the Glasgow images before them, offer new insight into perceptions of the everyday.”

John Clerk of Eldin was the first etcher to capture the character and mood of the Scottish countryside and his scenes reflect a change of attitude to Scotland that complemented the growing rise of the Romantic Movement in the late 18th century. His etching career spanned only a brief nine-year period from 1770-1779 but he produced a body of work which is unique within the history of Scottish printmaking.

The Etchings of John Clerk of Eldin at The Fleming Collection will mark the 200th anniversary of the death of a man who, after a successful career as an Edinburgh merchant, bought an estate near Lasswade in Midlothian, where he built his mansion of Eldin. But having become a highly skilled etcher, Clerk turned away from printmaking to write a book on naval warfare tactics which at the time brought him greater fame than his prints. The exhibition will be accompanied by a fully illustrated hardback book by Geoffrey Bertram.

Yvonne Rainer and Danh Vo in Best of 2012 for Artforum: Roman Signer, Horloge