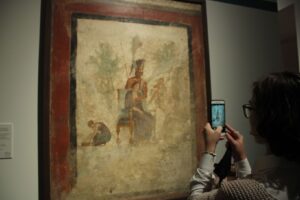 The masterpieces from what is considered the world’s largest gallery of ancient art – the Naples Archaeological Museum. Some of the stunning frescoes that embellished the ancient Roman houses of Pompeii and other cities around Vesuvius. More than 100 works that explore 1st century A.D. society, starting from the pictores, the painters whose role is still shrouded in mystery.

The exhibition titled “The Painters of Pompeii” is being held at the Civic Archaeological Museum in Bologna from 23 September 2022 and offers us a new perspective from which to explore the tastes and values of a world that remains an endless source of fascination for us.

By showcasing the excellent artworks with which the artists of the time decorated domus such as the House of the Tragic Poet and the House of Punished Love in Pompeii, and villas like that of Publius Fannius Synistor in Boscoreale, and allowing us to discover the tools of the trade – from the set square and the compass to preparatory sketches and beakers full of two-thousand-year-old paint – the exhibition captures the uniqueness of that world and the particular features of those pictores, whose art led to a true revolution over the course of just a few centuries; so much so that Pliny the Elder considered their works to “belong to the universe”. The main mission of the exhibition project is to contextualise the role and the economic conditions of those artists in the society of the time.