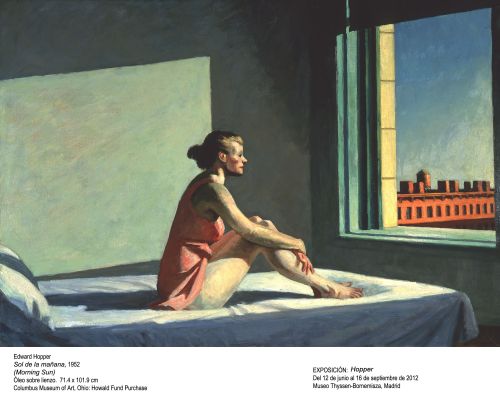 The Museo Thyssen-Bornemisza and the Réunion des musées nationaux de France are presenting the exhibition Hopper to be shown first in Madrid then in Paris. It will bring together the largest and most ambitious selection of works by the US artist ever to be shown in Europe, with loans from major museums and institutions including the MoMA and the Metropolitan Museum in New York, the Museum of Fine Arts, Boston, the Addison Gallery of American Art, Andover, and the Pennsylvania Academy of Fine Arts, Philadelphia, in addition to various private collections and with a particularly generous loan from the Whitney Museum of American Art, New York. The latter is sending 14 works from the Bequest of Josephine N. Hopper, the artist’s wife.

Hopper (Nyack, 1882 – New York, 1967) was one of the key figures within 20th-century realism. His paintings offered a faithful portrait of America at the time, focusing on its most modern aspects but without any element of idealisation and presenting reality in a simplified manner. While Hopper painted some landscapes and outdoor scenes, most of his works are located in public places such as bars, hotels, stations and on trains. These are almost empty settings with pronounced contrasts of light and shade that emphasise the solitude and drama of modern existence. And is that, despite being an extremely popular and seemingly accessible painter, Hopper’s works are among the most complex phenomena in 20th-century art. Furthermore, although wiithin the context of Europe Hopper is one of the best known and most highly appreciated American painters, his works have only been seen here in public exhibitions on a limited number of occasions. Rectifying this situation and bringing his work in depth of a wider public are the main purposes of this ambitious project.

The exhibition in Madrid will include around 70 works -paintings, drawings, prints and watercolours- and will offer an analysis of Hopper’s work from the years of his training at the New York School of Art to the artist’s mature work. It will be arranged thematically in order to emphasise the most frequently recurring themes and motifs in his work, while also maintaining a chronological flow.