Haiti: A Tribute in Art 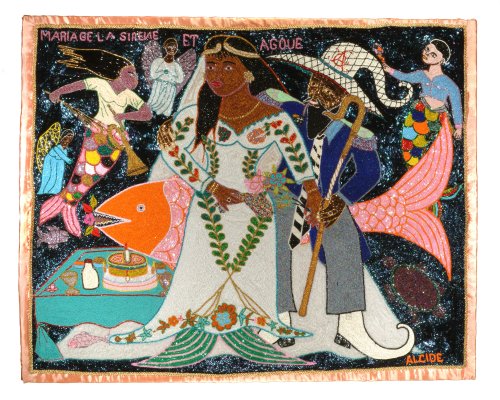 Much of Haitian art is closely tied to voodoo (also spelled vodou or vodun), a complicated blending of Christianity and African religions. Haitian flags, such as Yves Telemaque’s Erzulie Freda, are used at the beginning of voodoo ceremonies to summon the spirits they represent. Erzulie is the spirit of romantic love, and in this work, she is shown as a parallel to the Virgin Mary. Another flag, Marriage La Sirene et Agoue, shows the marriage of the god and goddess of the sea, Agoue and La Sirene. The figure of La Sirene appears in multiple works throughout the exhibition.

Many Haitian painters continue to honor the heroes of Haiti’s war for independence from France. Included in the exhibition are portraits of Henri Christophe, Jean-Jacques Dessaline, and Francois Dominique Toussaint Louverture, who commanded the armies of the Haitian revolution before he was kidnapped and taken to France.