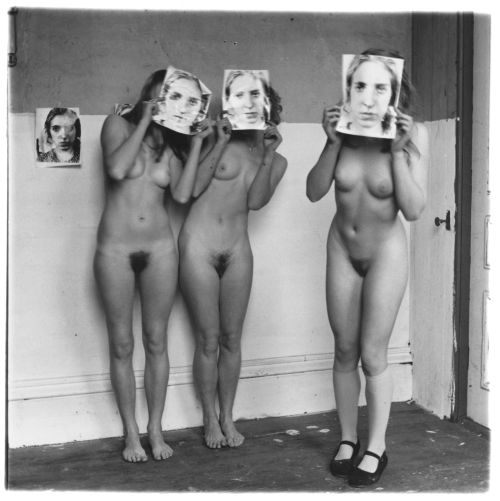 Francesca Woodman, the most comprehensive exhibition of the artist’s work since Woodman’s untimely death in 1981 at the age of 22, will be on view at the Guggenheim Museum from March 16 through June 13, 2012. Spanning the breadth of her production, the exhibition includes more than 120 vintage photographs, artist books, and a selection of recently discovered and rarely seen short videos, presenting a historical reconsideration of Woodman’s brief but extraordinary career.

This exhibition is supported by the Leadership Committee for the Guggenheim Museum’s 2012 Photography Exhibitions.

Woodman’s oeuvre represents a remarkably rich and singular exploration of the human body in space and of the genre of self-portraiture in particular. Her interest in female subjectivity, seriality, Conceptualist practice, and photography’s relationship to both literature and performance are also the hallmarks of the heady moment in American photography during which she came of age. This retrospective offers an occasion to examine more closely the maturation and expression of a highly subjective and coherent artistic vision. It also presents an important and timely opportunity to reassess the critical developments that took place in the 1970s in American photography.

Born in 1958 into a family of artists, Woodman began photographing at the age of thirteen. By the time she enrolled at the Rhode Island School of Design (RISD) in 1975, she was already an accomplished artist with a remarkably mature and focused approach to her work. During her time at RISD, she spent a year in Rome, a place she had visited as a child, and which proved to be a fertile source of inspiration.

After completing her degree, she moved to New York, where she continued to photograph. While making several large-scale personal projects, she also experimented with fashion photography, engaging in the age-old artist’s struggle to reconcile making art and making a living. In 1981, at the age of twenty-two, she committed suicide. Woodman’s tragic death is underscored by the startlingly compelling, complex, and artistically resolved body of work she produced during her short lifetime.

Woodman’s favorite subject was herself. From the very first time she picked up a camera, she used it to thoroughly plumb the genre of self-portraiture. Using a square-format camera, Woodman photographed her body in a variety of spaces. She had an affinity for decaying and decrepit interiors, particularly the richly layered surfaces of walls covered with graffiti or peeling wallpaper. In these settings the body is evanescent, appearing and disappearing behind objects, pressed into cupboards and cabinets, camouflaged against walls, or dissolving into a blur of movement. She frequently included objects within the frame—gloves, eels, mirrors—thereby investing them with a symbolic charge, and often making deliberate allusions to tropes from the Surrealist and gothic fiction she admired.

The presentation at the Guggenheim will comprise approximately 120 vintage photographs, including Woodman’s earliest student experiments at RISD, work from her time spent studying in Rome, her forays into fashion photography upon moving to New York, and the late, large-scale blueprint studies of caryatid-like figures for the ambitious Temple project (1980). The exhibition will include two of her artist books—diaristic collages of her own photographs and writings—which were an important form of expression, particularly at the end of her career. Woodman also experimented with moving images; six recently discovered and rarely seen short videos will be presented in the exhibition.