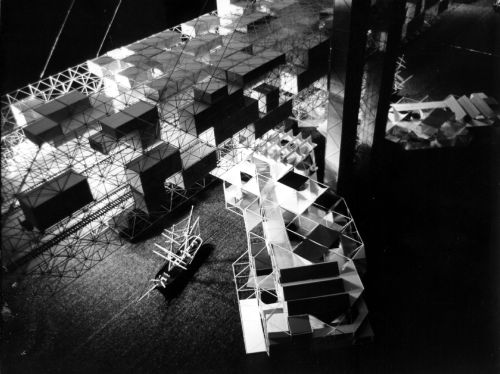 For the KUB Arena’s second project in 2011 the architects Yona Friedman (Paris) and Eckhard Schulze-Fielitz who lives in Bregenz are invited to make a joint presentation of their works—two architects who with their visionary ideas in the 1960s not only developed approaches to problems of urban planning, but also created the basis for a new philosophy in architecture. An important impetus in the exchange was their membership of “Groupe d’étude d’architecture mobile,“ initiated by Yona Friedman in 1958 as an organization concerned with the design of mobile forms of architecture. Within this framework they developed so-called megastructures which were supposed to be laid over existing cities and whose future inhabitants would be able to arrange their living environment flexibly—developments which against the background of growing megacities in Africa, Asia, and Latin America have lost none of their currency. On the contrary, Friedman’s manifesto L‘Architecture Mobile (1958), his space-city concepts such as La ville spatiale (1960), Schulze-Fielitz’s Raumstadt (1959) as well as his early involvement with subject matters such as environmental control, sustainability, and
resource shortages were forward-looking and still preoccupy urban planners and architects today.
Friedman and Schulze-Fielitz are still bound by a close friendship today, which found its architectural expression in a joint project for a bridge city spanning the English Channel (1963).

That’s the way we do it at Kunsthaus Bregenz (Austria) Holly Andres, Grace Carter, Gerd Aurell at Missoula Art Museum