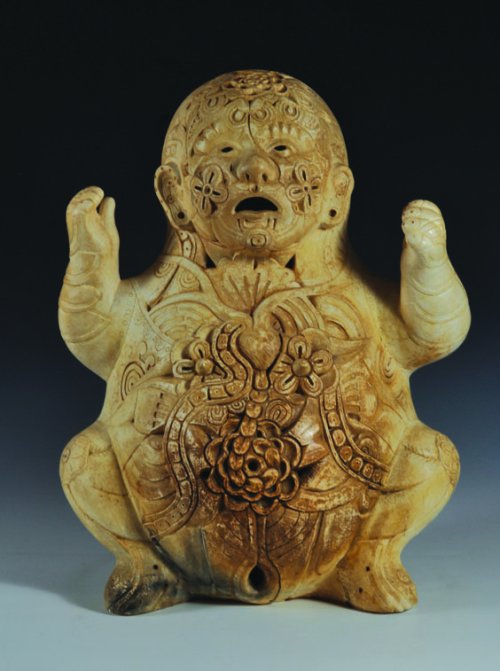 Although scholars have long emphasized that folklore is primarily an oral tradition, art objects are often central to the communication of these narratives. In Contemporary Folklore: Sculpture by Ann Chahbandour, Ryan Kelly, Lisa Naples and Kukuli Velarde, upcoming at the James A. Michener Art Museum this February, four regional artists mine both collective and personal stories to create sculptures that retell new histories. This exhibition of three-dimensional works runs from February 27 through June 13, 2010 in the Museum’s Fred Beans Gallery.

“By translating stories from mythology, legends and personal experience into sculptural works, these four artists raise questions about how we come to culturally understand each other and the world in which we live,” explains Kristy Krivitsky, the Museum’s Associate Curator of Contemporary Art who organized this exhibition.

Philadelphia-based artist Ann Chahbandour investigates interpersonal relationships through the creation of bronze and ceramic tableaux sculptures whose subjects are influenced by mythology, religion and the decorative arts. She received her M.F.A. in sculpture from the School of the Art Institute of Chicago and completed an independent study through Rhode Island School of Design. She then received a Fulbright Fellowship to study stone carving in Italy. Since 1973, her work has been shown extensively in solo and group exhibitions throughout the United States and abroad.

Ryan Kelly, an Artist In Residence at The Clay Studio in Philadelphia, works with papier-mâché and clay to create large puppets based on historical and mythological heroes which then become used in performances. He holds a B.F.A. in Ceramics from the Kansas City Art Institute, and an M.F.A. in Ceramics from The Ohio State University. He has taught at The Ohio State University, Swarthmore College and the Maryland Institute College of Art.

Founder of the Elephant’s Eye Studio Tour in Bucks County, Lisa Naples creates figurative ceramic sculpture using personal history and iconography to explore the nature of growth and change. After post-graduate studies at the University of the Arts in Philadelphia and Rochester Institute of Technology, she received her M.F.A. in Ceramics from Nova Scotia College of Art and Design. In addition to exhibiting at such prestigious venues as the Smithsonian Craft Show in Washington, D.C. and the Functional Pottery Invitational in Santa Fe, New Mexico, the Doylestown, Pennsylvania resident has served as an instructor at esteemed arts and craft centers throughout the United States.

Now living in Philadelphia, Kukuli Velarde mimics pre-Columbian vessel forms from her native Peru to create figures that tell stories about her life and her culture. For this exhibition, Velarde shares a selection of pieces from her ceramic Isichapuitu series, an installation of several versions of the same figure based on a 2,000 year-old Mexican sculpture “retold” from her own perspective. She received her B.F.A. from Hunter College, University of New York and has exhibited her sculptures, prints and drawings at such varied museums as Bronx Museum in Bronx, New York; Palais de Nations, Ariana Park in Geneva Switzerland; Museum fur Angewandte Kunst in Frankfurt, Germany; and the International Biennial of Lima, Peru.

In conjunction with this exhibition, the Museum presents a tour of ceramic artist Lisa Naples’ private studio in Doylestown, Pennsylvania on Friday, April 9 from 10:00 a.m. to noon. Naples demonstrates construction and sculpting techniques, and discusses the role of found objects and how they help tease out the narratives within her works. The fee for this program is $20.00 ($15.00 for Museum members). Transportation is not included; directions are provided to registrants. Advance registration is required by calling (215) 340-9800.

What happens next is a secret Griff Williams: It Is Not Down in Any Map; True Places Never Are