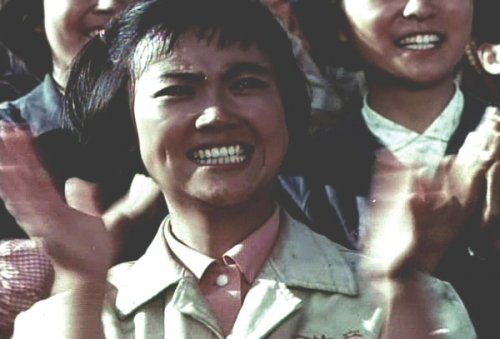 [ad#lb]
China in four seasons: Zhang Peili addresses the work of an artist at the threshold of experimental practice in media arts in China since the 1980s. He is a formative pioneer of video art practice in China thanks to groundbreaking work in the late 1980s and early 1990s, including the country’s first publicly-displayed video artwork.

“A pivotal presence in the exhibition is this astonishing five-channel video work A Gust of Wind (2008) which offers a breathtaking cinematic parable on urban development and architectural efforts in the face of unstoppable and inevitable velocities of change,” she says.

“Highlighting unpredictability in the face of unexpected forces is strikingly topical. China is currently suspended between an unprecedented development boom with unknown social and environmental outcomes, and the fickle nature of economic progress as demonstrated by the global recession.’

Beijing-based curator and writer Pi Li notes: “His earlier works have experimented with aesthetics of boredom and have treated themes of technological, social, and political control. His more recent work interrogates viewing conventions, perceptions of time, and notions of progress through the remixing and editing of found footage; it also challenges the boundaries of media art.”

A founding member of the artists’ collectives ‘Pond Society’ and ‘Big Tail Elephant Group’ in the 1980s and 1990s, Zhang Peili is now the Dean of the New Media Department of the China Academy of Arts in Hangzhou.

This is the third project in the Govett-Brewster’s year-long series exploring the breadth, power and specificity of art from the world’s most populous country. Artists Jin Jiangbo and Guo Fengyi have already presented in China in four seasons, and the combined work of Song Dong and Yin Xiuzhen will follow Zhang Peili. A bilingual catalogue on all four projects will accompany the final exhibition.