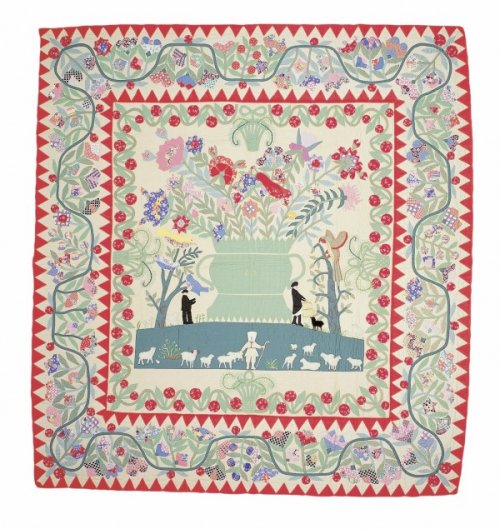 [ad#lb]
Selections from a rich artistic tradition will be displayed at the Mint Museum of Craft + Design beginning this summer in the exhibition American Quilt Classics, 1800-1980: The Bresler Collection. From rare crib quilts to modern Amish textiles, the quilts on view reflect America’s diverse cultural and artistic heritage. Between 2000 and 2001, Fleur and Charles Bresler donated to the Mint Museum of Craft + Design 36 American quilts from their collection. Ranging in date from the late 18th century to the mid-20th century, the quilts document the evolution of American quilting traditions, most notably the Baltimore Album Quilt and the Victorian Crazy Quilt. The exhibition explores the historical and cultural context of the quilts, as well as the economic and technological developments that influenced the textiles’ materials and designs. Quilted bed covering and needlework traditions arrived in America with the first colonists. Each wave of immigrants would add to the development of the American quilt along with new technologies for printing brighter fabrics at lower prices. By the mid-1800s, an American style had emerged that was distinct from British and European influences. Quilt making surged in popularity during the Great Depression as a source of relief from hard times. Hoping to jump-start the ailing economy, manufacturers created light and cheery fabrics, such as those seen in the exhibition’s Postage Stamp Quilt, which contains thousands of tiny pieces of cloth that were popular in the 1930s. Despite declining during World War II and the postwar years, quilt making rebounded following the popular and critical reactions to two exhibitions at the Whitney Museum of
American Art, Abstract Design in American Quilts in 1971 and The Quilts of Gee’s Bend (Alabama) in 2003. Quilts gained in appreciation as works of art in their own right, and major public and private collections were formed throughout the country. Contemporary quiltmakers worldwide continue to explore and develop this time-honored tradition, combining colors, shapes and textures in new and exciting ways. Organized by the Mint Museum of Craft + Design, American Quilt Classics, 1800-1980: The Bresler Collection was originally on view there in 2003. Since then it has traveled around the United States, and is returning to its home for an encore presentation. The exhibition will be accompanied a full-color catalogue available for sale in The Mint Museum Shops. American Quilt Classics is sponsored by The Founders’ Circle Ltd., the national support affiliate of the Mint Museum of Craft + Design. This will be the final exhibition displayed at the Mint Museum of Craft + Design in its current facility. The craft museum will close to the public during the first quarter of 2010 as it prepares to relocate and reinstall its collections at the new Mint Museum in Center City opening in October 2010.