The fifth edition of Art New York closed on Sunday, May 5, where it reported consistent high-value sales and stellar attendance, with 33,600 prestigious private and institutional collectors, connoisseurs, and advisors attending throughout the weekend. The fair, which opened on Thursday, May 2, presented robust and dynamic presentations from 74 international galleries, and work from influential artists from the contemporary, modern, post-war and pop eras.

Renowned as one of the city’s leading contemporary and modern art fairs, Art New York presented premium works of art from more than 300 artists combined with curated programs of special projects, non-profit partnerships, and CONTEXT, a destination for new and established contemporary galleries to present emerging, mid-career and cutting-edge talent. The collector’s afternoon VIP Preview, which occurred on opening day at 2pm before the fair opened to the public at 5pm, saw VIP ticket-holders gathered from early morning and resulted in numerous sales and a record-breaking number of visitors with 6,000 people attending that day.

Julian Navarro, Co-Director, Art New York, “This was a very strong edition due to the important sales reported by our galleries of today’s most exciting and influential artists, the quality of the attendees and the vibrant atmosphere. The fair’s success indicated a positive and growing market for emerging and mid-career artists. Art New York continues to remain a vital fair for collectors during New York’s art week to discover and acquire fresh and significant works from contemporary and modern art.”

As guests entered the fair, they were drawn to a $3.5 million portrait presented by RUDOLF BUDJA GALLERY titled, Liza Minnelli, by Andy Warhol. The monochrome portrait has a flash of color with the star’s lips painted red, and is one of ten portraits made, with Liza holding four in her personal collection.

Two high value works at Martinelli Art Gallery titled Concetto Spaziale “Attese”, 1960 by Lucio Fontana priced at $2.5 million, and Achrome by Piero Manzoni priced at $3 million appealed to guests, who were also entranced by Art of the World Gallery’s bright red booth that showcased work including Random Sewing, 2009 by Jim Dine and Two Friends, 2012 by Fernando Botero. As attendees moved through the fair, they engaged with Jellyfish Eyes, (Black I), 2004 by Takashi Murakami and several pieces by Jean Dubuffet at Rosenfeld Gallery, in addition to the stunning collections of Frank Stella and Marc Chagall at Masterworks Fine Art.

In the VIP Lounge, Chase Contemporary revealed a series of never-before-exhibited kinetic works by esteemed artist, inventor, and pioneering engineer Chuck Hoberman including Spiral, 2011 and Helicoid, 1997 and Iris Dome, 1994, which has been displayed at The Museum of Modern Art. 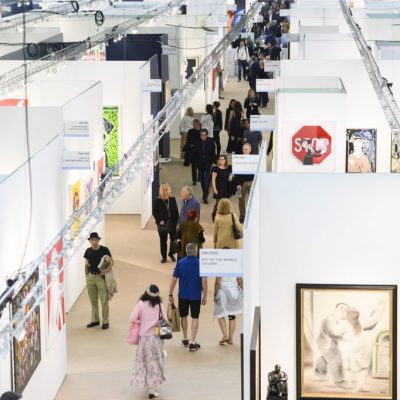 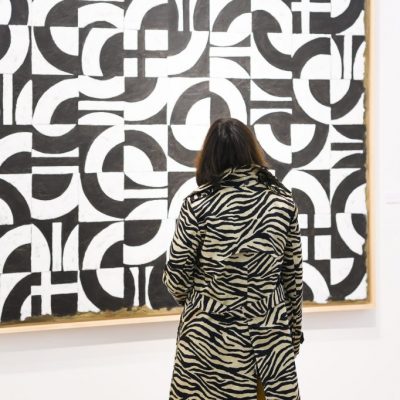 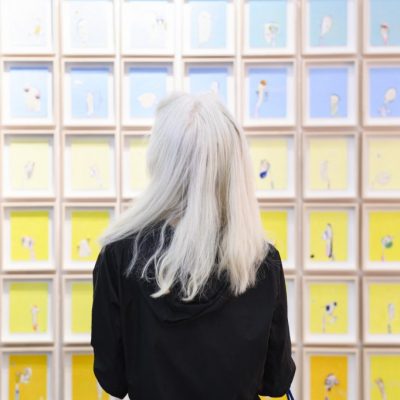