From 25 May 2022 David Harry’s solo exhibition “Anti-action painting” will be held in Florence at Palazzo Rosselli del Turco in via dei Serragli, home of the Stengel Collection. Some of David Harry’s most famous paintings from the anti-action paintings series will be on display, along with a new series of portraits. The portraits were made in the last two years and are presented as an absolute preview in Florence in the exhibition curated by Vito Abba.

His large abstract paintings have been defined as Anti-Action Painting, where slow drips and brush strokes of warm colours that stratify and overlap, form depth, veiling and nuances. His method of painting does not use fast jets and dynamic sprays of paint on the canvas which then descend irregularly, but more as slow and warm drips that stratify, one layer on top of another, to create a profoundly deep effect. Fields of light and shade, of cold and warm tones, of black, cobalt blue, vermilion, blood-red and blinding golden candour, in a depth of field where many a time, the viewer perceives perspective and three-dimensionality. David perfectly combines experimentation and tradition with his intuitive sense of colour. Born to artist parents, he breathed the smell of painting and learned painting techniques from an early age. He has developed a very personal technique, made up of large dense brushstrokes, distributed on large canvases, as he explains, “not with the wrist but with the shoulder”.

The exhibition in Florence by an American artist consolidates the relationship between Palazzo Rosselli del Turco and the United States. Various mid-nineteenth century American artists had their studios in this palazzo, including painters William Page and Walter Gould and sculptors Alexander Galt, Henry Kirk Brown and Thomas Ridgeway Gould. During the years of Florence Capital (1865-1871), the embassy of the United States of America was located in this medieval building, with an impressive Baroque façade and fine eighteenth century frescoed ceilings. 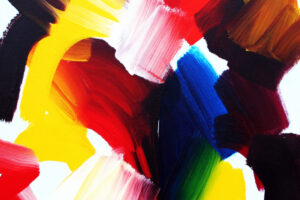 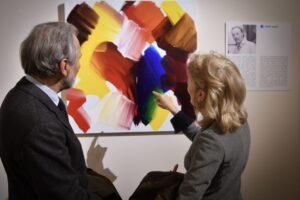 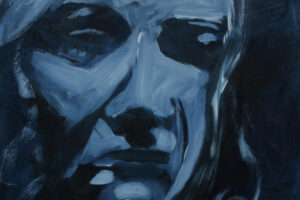 David Harry - Self portrait as Robert Plant - acrylic on canvas 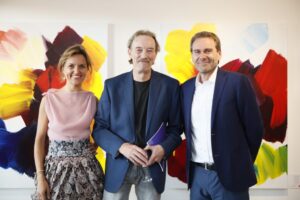 How NFTs Work: What You Need to Know About Non-Fungible Tokens Venice Biennale Arte 2022 Gala Raises Over €1 Million to Support Humanitarian Efforts in Ukraine